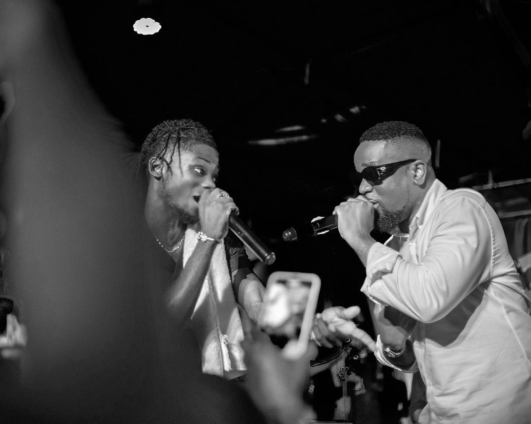 Rapper Sarkodie pulled a surprise on patrons of ‘Hero Concert‘ when he showed up to perform with the headline act Kuami Eugene.

The duo performed a live rendition of their recent controversial collaboration ‘Happy Day’ to an excited crowd at the +233 Jazz Bar and Grill.

The patrons joined Kuami Eugene and Sarkodie to sing the song which had gone viral after the latter seemingly touted the achievements of President Akufo-Addo.

Happy Day had gone viral after Sakodie’s endorsement of government’s fight for a second term.

However, hours after Ghanaians began commenting on their support for the NPP, Sarkodie came out to deny the song was released to support the party and President Akufo-Addo’s bid for a second term.