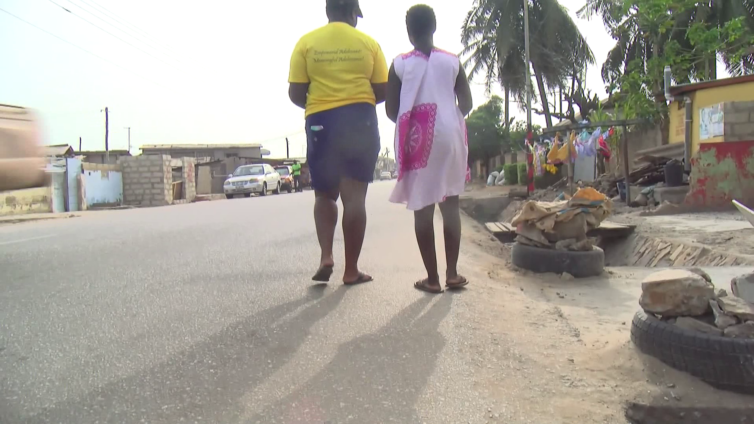 La is a community in Accra which buzzes with life. But beyond its vibrant lifestyles are seething social issues gradually sinking the township.

“I wanted to be a nurse. But because I gave birth, my dreams were crushed,” says the 26-year-old.

10 years ago, Christiana had her life ahead of her. Bursting with dreams and ambitions, she wished to chase the stars and make her mark in her society.

But the dreams were not realised. Becoming a mother at just 16 years of age, she had to shelf her ambition of becoming a nurse and take up a new role- motherhood.

Christiana is just one of the many young girls in Ghana who have had to suffer such a fate.

According to the Ghana Health Service (GHS), 109,888 teenage pregnancies were recorded in 2020 alone.

These frightening figures have frequently made headlines but many Ghanaians believe nothing is being done to tackle the issue.

But Sexual and Reproductive Health and Rights (SRHR) activist, Aurelia Sowah-Mensah, in her own small way, is steadily changing the narrative in her community.

Born and bred in La, the 27-year-old says she cannot sit unconcerned for the future of adolescent girls to be marred by unplanned pregnancies.

“The sad part is, when they get pregnant some people resort to unsafe abortions and in a worst-case scenario, they die. Others get pregnant and have the child but because there is no money at home to take care of the child, that child also grows up to become a teen parent and the cycle continues,” Aurelia observed.

Her observation has, sadly, been lived by Christiana when she had her first child a decade ago.

Recounting her story, Christiana said she was forced to drop out of school when she got pregnant.

While admitting that she had an aunt who supported her immensely, Christiana said being a teenage mother was an arduous task.

Unfortunately, the woman whom she fell on for financial and emotional support passed away.

The teen mother had to find another means of income. Christiana, however, did not go for the conventional means of making ends meet and she paid a hard price for that.

“I met a man who provided me with the kind of support I used to get from my aunty. I thought he loved me and would marry me. I got pregnant for him but he denied the pregnancy and left me,” Christiana tearfully recalls.

The ordeal made her life more difficult than she could ever imagine.

“I was just 19 years when I delivered my second child. I went through hell after that. It wasn’t easy at all,” she says amidst tears. “I worked with someone who paid me ₵5 a day. You cannot do anything with that but I had to manage because I had a child on the way.”

“Now I work at the Makola market. It’s by grace that I survive each day,” she says.

“It is sad to see someone your age with so much potential drop out of school because they had a baby and there was no money to go back to school. It is sad,” she says.

As an SRHR activist, she wishes young ladies had insight on how to have control over the outcome of their sexual affairs.

For this reason, she spends her time engaging young people on sexual reproductive health to help control birth.

“So, if I have information on SRHR, why not share? That is the least I can do. I may not have the money but I know how to sensitise and so that will be my contribution to change the narrative.”

Aurelia advocates for family planning methods programmes to be organised for adolescents in the county.

She believes if teenagers cannot abstain from sex, they should be informed about other alternatives they can explore when having intercourse.

The situation, she says, will effectively curb teenage pregnancies not only in her community but at the national level as well.

“In Ghana, the hypocrisy surrounding SRHR and family planning is too much,” she opines.

“We know these girls are sexually active, why are we pretending as though they do not know [what sex is]?”

“On both mainstream and social media, everything is screaming Sex! Sex! Sex! So why the pretense? We need to educate them so that we can trust that they will make the right decision.”

Christiana, after delivering her second child, decided to make “the right decision” as a sexually active young lady.

She adopted a family planning method.

“My past mistakes cannot be undone, but with the family planning I can have a say in my future,” she says.

Rennel Lamptey is a teenager who has recently given birth to twins. Aurelia has convinced yet another person to sign unto a family planning method.

“I will not force you but I will advise you to go on a family planning method. There are condoms; that one is safer because they prevent both STIs and unplanned pregnancies. There are IUDs and implants as well. So you have so many options to choose from,” Aurelia tells Rennel.

Seven years after committing her life to Sexual and Reproductive Health and Rights activism, eyes beyond the borders have noticed.

Aurelia is one of 50 awardees chosen from around the world to participate as a speaker in the upcoming 2022 International Conference on Family Planning (ICFP) Youth Trailblazer.

The ICFP Youth Trailblazer Award aims to amplify and highlight the voices of young leaders in family planning and sexual and reproductive health and rights (SHRH) through active planning and participation in the 2022 ICFP.

Director of the Bill & Melinda Gates Institute for Population and Reproductive Health and Chair of ICFP’s International Steering Committee, Jose G. Rimon II explained why Aurelia stood out among the numerous applicants.

“She has a personality that would engage you and that is very important because people who are selected become speakers at the Conference.”

“When you look at her background, she has done a lot of work already in the SRHR field so these characteristics were very prominent in her selection,” he explains.

Acknowledging that teenage pregnancy is not just a Ghanaian problem, Mr Rimon II highlighted some steps that can be done to prevent unplanned pregnancies.

Aside from advocacy, he believed data gathering plays a crucial role in efforts to curb the menace since results go a long way to inform decisions enacted and implemented by policymakers.

“We can’t deal with this as though we are experts in white-coat. We need to deal with it in the language that young people understand and the language of their own culture otherwise we will not be able to engage them effectively,” he recommends.

As an awardee at this year’s Youth Trailblazer, Aurelia says the recognition is a stepping stone to greater heights.

“I feel great about this opportunity but it also means more work. If you’ve been recognised as someone who is doing something in the SRHR community, it means ‘we’ve seen your work, but we’re expecting more from you”.

Teenage pregnancy is still a big problem in Aurelia’s community but with a new opportunity to learn more and gain resources through this programme, she hopes to be a stronger voice that helps change the story.