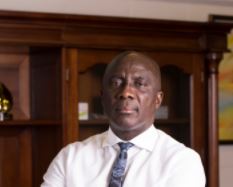 The Group Chairman for Tobinco Group of Companies, Elder Nana Samuel Amo Tobbin, has cautioned the youth against engaging in homosexual activities.

The comment by the business mogul is in support of the ‘Promotion of Proper Human Sexual Rights and Ghanaian Family Values Bill, 2021’, also known as the “Anti-LGBTQ+ Bill” currently before parliament.

Speaking on the topic, Elder Nana Amo Tobbin explained that the issue of LGBTQ, which has been in existence for a long time goes against procreation.

He noted that the act distorts procreation and seeks to end the human race.

“I applaud the Chairman of the Pentecost Church and the general Christian community on their stance against LGBTQ+.  I believe it’s a very bad practice which shouldn’t be tolerated,” he added.

Meanwhile, President Akufo-Addo says he does not feel pressured by the ongoing debates with respect to the passage of the Promotion of Proper Human Sexual Rights and Ghanaian Family Values Bill, 2021’.