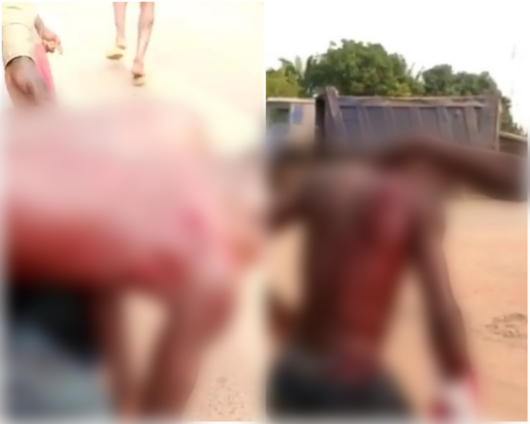 One person has allegedly sustained a gunshot wound at Nuaso in the Lower Manya Krobo municipality during a tussle between some residents who have been resisting the installation of prepaid meters by the Electricity Company of Ghana.

The identity of the middle-aged man has not been readily established but in a viral video, he bled profusely from his back while one of the residents was overheard claiming “the soldiers shot him. Ghana, let’s be careful o, this is what the soldiers are doing to us in Odumase Krobo”.

There is brewing tension in the Lower Manya Krobo Municipality as some residents of Nuaso, a community in the municipality have accused the military detachment who are assisting the Electricity Company of Ghana (ECG) to install prepaid meters of assault.

The residents allege that the team attacked and severely subjected some of the residents to beatings, even though they did not resist the installation of the meters.

The unprovoked attacks have left many injured while others live in fear.

One of the female victims of the attack explained that “when they came, I was preparing food in the kitchen. They said I should enter my room and I said I was cooking so I cannot go with them.”

“The moment I said I cannot go, they took their cane and started beating me. They said we are going to come again, and we will come and beat you more than this.”

Ebenezer Teye Padi who also sustained injuries to the face and back alleged that one of the soldiers hit his head with the butt of his rifle while sitting with friends.

“We have a resting place, we sit there. We saw the military men coming towards us, they didn’t ask us any questions and they started beating us up. Anybody they saw roaming about, meant that you were their enemy.”

“Nobody told us that ECG and military men are coming to us so if you are a resident you will ask them what they are doing here. That is our mistake. Look at my back, they hit my head with their gun,” he said.

In a related development, ECG in response to the accusation has condemned the incident, noting that “these attacks are unfortunate situations.”

“The team has withdrawn from Nuaso Old Town,” the ECG stated.

Explaining what accounted for the attacks, ECG said “in Nuaso Old Town, there was resistance. One woman threatened to pour hot oil on the ECG personnel and the Military as well.”

“There have been reports of constant verbal abuses and attacks on the personnel doing the installation in Nuaso Old Town.”

ECG, however, called for peace and calm so that their personnel can be able to discharge their duties peacefully.

DISCLAIMER: The Views, Comments, Opinions, Contributions and Statements made by Readers and Contributors on this platform do not necessarily represent the views or policy of Multimedia Group Limited.
Tags:
ECG
Lower Manya Krobo
Prepaid meter
Shooting