Man assaults preacher on the street 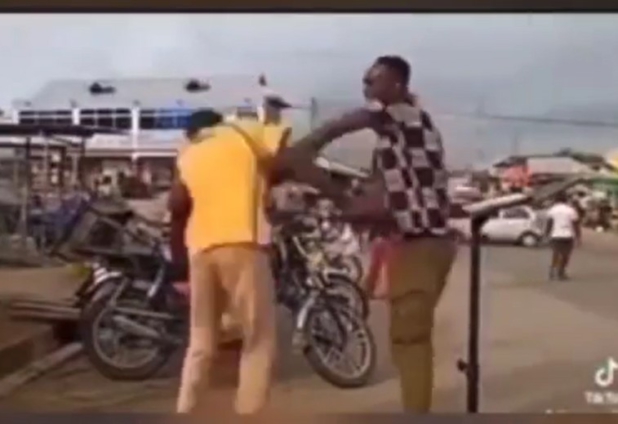 Social media users have mounted a search for a man who was captured assaulting a preacher on the street.

In the trending video, the man approached the preacher abruptly, grabbed his hand and twisted it in an attempt to snatch the microphone.

When the pastor refused to hand over the microphone, the man slapped him.

He could be heard asking the pastor why he was there preaching the word of God after his stunt at “Kyiri Abosom”.

The pastor remained quiet but still unwilling to let the microphone go. The attacker slapped him numerous times and forcefully took the microphone.

Despite the mic being in his possession, the man continued to assault the pastor. The preacher’s colleague who was present immediately went to his aid.

The video has angered many people who are promising to get the man arrested for assault.

Other people also wondered why observers who could be heard saying “oh” did not rush to stop the assault.

“Sometimes we, the observers, behave so weirdly and inhuman. See people standing in watching the beatings the guy is receiving without rushing to his rescue,” one user wrote on Instagram.

“Getting him arrested for the violence, yes, he needs to be dealt with lawfully…but it’s about time Christians know u can’t just insult other belief systems because of what u believe,” another added.