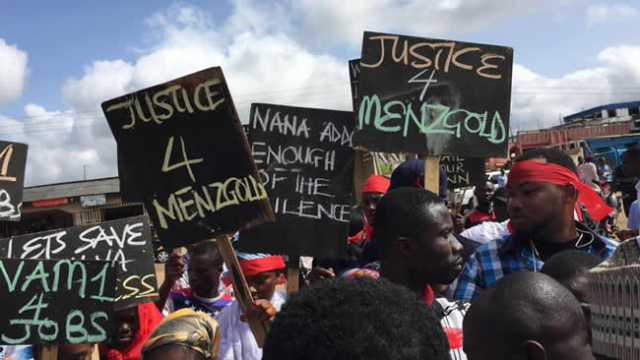 The demonstration is to demand the payment of their locked-up monies.

The spokesperson of the group, Fred Forson, in a media engagement explained the rationale behind their latest move.

According to him, they want a presidential intervention to salvage their situation.

He added that it has been four years of hardship and pain for them since the collapse of the company four years ago.

“We will converge at 9 am at the Customs traffic light. From there, we will do a walk through the Ministries to the Black Stars Square. There, we shall have a press briefing. At 11 am, we will present our petition.

“It is exactly four years since Menzgold collapsed and customers have used many avenues to retrieve their investments, but it appears there are no results. So this time around, we want to petition the president for a presidential intervention.”

Recently, the group said that 179 of their colleagues who invested in the gold dealership have died.

Meanwhile, Attorney General and Minister for Justice have said the dockets for the prosecution of the owner of the company, Nana Appiah Mensah aka NAM1 is almost ready.

Godfred Yeboah Dame said “painstaking investigations” went into the building of the dockets.

“Painstaking investigations, dockets of the financial crime, are almost ready for the prosecution to commence in earnest.”

DISCLAIMER: The Views, Comments, Opinions, Contributions and Statements made by Readers and Contributors on this platform do not necessarily represent the views or policy of Multimedia Group Limited.
Tags:
Akufo-Addo
Costumers
Jubilee House
Menzgold
NAM 1