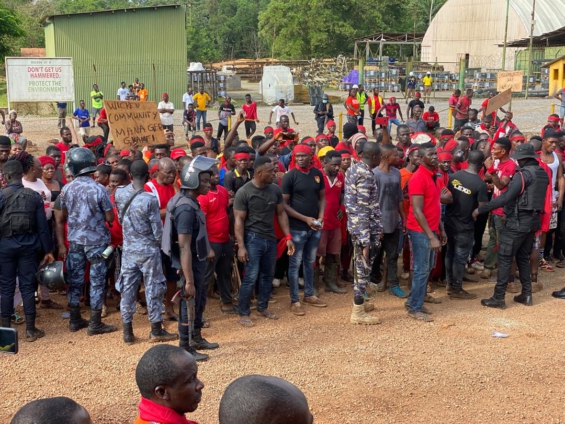 Do you know of a foreign-owned mining company that has placed a moratorium on property developments in a local community in Ghana for eight continuous years despite the idea of mines being catalysts for development in our communities, meet Golden Star Resources, GSR.

Readers may recall the heinous issues surrounding the sale of the Bogoso-Prestea Mine by Golden Star Resources (GSR) to a newly formed non-listed mining firm Future Global Resources (FGR) on 30th September 2020 in which agreement Golden Star Resources focused on relinquishing its rehabilitation liabilities of some $53 million to demonstrate to the global market of cleaning its balance sheet and having a positive cashflow.

That notwithstanding, GSR opted to deceive the communities in which they operate by departing without the appropriate consultation and fulfillment of promises made to the communities.

It will be recalled in the local media that some communities in the catchment demonstrated against GSR on October22, 2020 demanding GSR fulfills its promises before leaving the community.

On a fact-finding mission at the mine site and communities, observations were that GSR had demonstrated unethical business practices and left the mining community deceiving both the community leadership, chiefs, and the workforce in other to maximize their gains from the sale of the Mine.

The communities in which GSR – Bogoso-Prestea Mine operated woke up on the morning of 27th July 2020 to hear in the airwave’s announcement of a binding agreement for the sale of the Bogoso Prestea Mine without any prior consultation/communication to even the community leadership.

While seeking answers to questions they don’t understand regarding the sale, GSR on 30th September 2020 announced the binding agreement of sale had been concluded and that the mine is sold.

Further inquiry by the community leadership indicated the mine had been sold to a firm that is new, non-listed, and difficult to trace, which became a worrying situation to the community.

The communities prior to the sale had agreements with the company which included – Corporate Social Responsibility Agreement, Relationship and Sustainable Livelihood Agreement, and Local Employment Agreement.

This disrespect for the community leadership was part of the underlining factors triggering the demonstration of the communities against the Mine and its new owner barely a month when the new owners took over.

GSR aimed at a clean balance sheet disregarding the consequences to the buyer (FGR) and the communities in which they operated. Our fact-finding indicate that the mine which has the largest concession in Ghana was purchased by the buyer online without the buyer (FGR) visiting the mine site at least once to do any due diligence and to ask the hard questions for assurance of mine continuity after the takeover.

Such an offer and acceptance agreement are not likely to be the case for mining giants like Goldfields, Newmont, and the likes. The issues surrounding the sale tend to amplify the speculation that the sale was a backdoor arrangement between friends and with the intention to get rid of the Bogoso Mine and continue with the exploitative gains from the sister Mine (Wassa Mine) in Ghana – a business approach which is unethical.

Fact-finding could not ascertain whether the sale offer was made to other mining giants (Newmont, Anglogold Ashanti, Goldfield, Barrick).

An occurrence indicating this transaction was to get rid of the mine was the fact that the sale agreement did not commit the buyer to make any payment to GSR in the immediate terms in acquiring the mine but deferred all payments to future dates contingent on some milestones which when not achieved, the buyer could quit through liquidation reverting the mine, employee obligations and other rehabilitation liabilities of some $53 million dollars to the Government of Ghana.

It is heartbreaking how such a diabolic and dubious game plan could be executed by a mining company led by its CEO Mr. Andrew Wray (investment banker turned miner) when the Government of Ghana had entrusted the country’s gold resource tothe company with the hope of getting Ghana and the investors a win-win scenario to benefit and develop the Ghanaian local communities.

GSR has communicated its values to the world as – Caring, Collaboration, Fairness, Honesty, and Respect, and claims to be a Sustainable and diversified gold mining business that stakeholders will be proud to be associated with. Our fact findings indicate this is a deception to the public;

Caring – GSR disposed of the Bogoso – Prestea mine with no regards to survival of the mine, denied the workforce their entitlement and left unfulfilled promises to their catchment communities creating tension at the mine and within the communities they once operated. This act does not demonstrate –this value.

Honesty – One of the behaviours they have idenfitied to be associated with the value of Honesty is respect for agreements. However, observing their actions and inactions with respect to employee contracts and the community agreements, it is abundantly clear this is also a ruse.

The Lamancha investment group after acquiring the majority shares and controlling GSR has not been honest with the workforce and community and broken all initial promises.

Their deception of revamping the Bogoso-Prestea mine was to get entry to the already profit-making Wassa Mine.

All occurrences indicate there was a premeditated intention to dispose of the Bogoso – Prestea Mine and make exploitative gains from the Wassa Mine. GSR with its Lamancha investment group executed this plan perfectly by selling Bogoso-Preatea Mine at near-zero cost after 18 months of acquisition – the mine they promised to grow and diversify- and making gains from the one that was already yielding profit during their share acquisitions.

An act of dishonesty.  If FGR (Buyer) happens to be an independent firm and not an accomplice, then GSR has deceived the firm to create an already tensed environment for their first-time operation as a new mining Company.

Respect – It is obvious GSR does not respect agreements and people. GSR was welcomed to a community that would go all out to ensure the progress of the mine in a diversified manner. GSR sold the mine with no notice and departing discussions with the community leaders and employees. GSR leadership failed to even come to the catchment communities to exchange departing pleasantries and refused to come to the mining site to exchange employer-employee departing pleasantries.

Sustainable and Diversified Gold Mining Company – On arrival of the Lamancha investment group in the third quarter of 2018, various promises were made to diversify the mine and to include upscaling of an existing underground mine, resettlement of the Dumasi Community, and mining of refractory ore to increase the life of mine and to continue with the campaign for additional oxide deposits.

This we now know for a fact, was a ploy to get access to the already profitableWassaMine as none of the promises made during the share acquisition by Lamanchafor the Bogoso-Prestea Mine has been fulfilled.

It is pathetic how a business entity expected to help develop rural communities tries to deceive and rob the communities of their already earned livelihoods.

In 2018 when Lamancha investment group acquired majority shares in the Bogoso-Prestea Mine, GSR had a local community livelihood programme called Golden Star Oil Palm Plantation (GSOPP), registered, owned, and operated by the Chief’s within the communities and employing over 1000 workers in the plantations at Bogoso-Prestea.

Funding of GSOPP was through a $1 per ounce agreement between the mine and the community and this is received by the chiefs in trust for the communities.

These chefs have donated their farmlands, used the proceeds from the $1 per ounce to develop an oil palm plantation to serve as a livelihood for their communities in the event the mine is no more, for which GSR has even taken advantage and the credit to flag the initiative as a Corporate Social Responsibility in every publication including the recent 2020 Q3 report.

Sadly, during the sale of the Bogoso-Prestea Mine, GSR indicated this livelihood initiative would not be part of the sale and that though the $1 per ounce will be paid by the buyer (FGR), GSR will still control the plantation and report on same as their Corporate Social Responsibility. This agreement was curiously accepted by the buyer (FGR).

One would expect that a new mine owner intent on developing the community would be in a hurry to take on such an initiative. The irony then is whether the GSOPP project belongs to GSR. In furtherance to the latter, it is again ironic for a mine to operate on one concession and claim ownership of CSR project on another concession owned by a different mine.

This can only happen if the buyer and seller are allies aiming to make maximum gains through deception and marginalizing legitimate stakeholders. Fact-finding has observed that this GSR act of deception has been recognized by the Chief’s in the communities who are fighting it and this has generated tension between GSR and the Communities with a spillover to FGR (the buyer).

Should Government Sit Down Unconcerned?

Though not engaged in the fact-finding mission, the MCE and MP of the PreteaHuni-Valley Municipality might not have been consulted on GSR’s exit just as happened to employees and the local communities’ leadership.

However, all these occurrences following the sale within the community and the mine site have been under the watch of these government representatives (Dr. Isaac Dasmani and Hon. Mrs. Barbara Oteng Gyasi). Dr. Dasmani, the MCE, however, made an intervention during the October 22 demonstration of the community and workforce where he appeared to calm the situation. No progress whatsoever has been seen as following his intervention. With pressures still simmering, the situation remains volatile.

The Government of the day and its representatives in the Municipality ought to be proactive and give this issue the needed attention before it escalates further – a major outcome of which will be the loss of the mine which is the main economic lifeblood of the Prestea-Huni Valley Municipality.

The author, Isaac Essien is a youth leader at Prestea Bogoso Municipality.