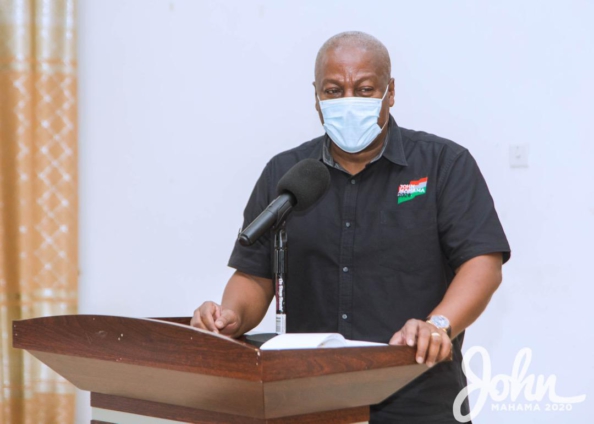 Former President and flagbearer of the opposition National Democratic Congress (NDC), John Dramani has noted that his party is committed to a peaceful election.

He notes, however, that the posturing of the ruling government raises questions about its commitment to a violent-free election in December.

Addressing the chiefs and people of Mepe in the North Tongu constituency on Monday to kick start his four-day tour of the Volta Region, Mr Mahama observed that the government does not seem to be interested in making the general elections in December a peaceful one.

“In December we will go for an election and we want our election to be non-violent and we in the NDC are peaceful people. But our opponents have a tendency for violence and they have displayed at any given opportunity”, he said.

Mr Mahama cited a number of incidents to buttress his point.

He recounted that thugs of the New Patriotic Party (NPP) who chased out a judge in a court in Kumasi were given just a slap on the wrist whilst those who perpetrated the Ayawaso West Wuogon by-election violence continue to walk free, without any sanctions against them.

He also recalled how some members of the NDC were attacked at Banda during the recent voter registration exercise, leading to the death of an innocent person.

He also cited the incident of the Special Development Initiatives Minister, Hawa Koomson, firing shots at a registration center during the just ended voters’ registration exercise.

“We have a whole minister claiming that she fired a gunshot at Kasoa during the registration exercise and nothing has happened,” he said.

“So when you look at all these things, you can predict what they will do in the elections and “officials of the party have said that, Ayawaso West Wuogon was a dress rehearsal and that the real thing was going to be on voting day”, he added.

DISCLAIMER: The Views, Comments, Opinions, Contributions and Statements made by Readers and Contributors on this platform do not necessarily represent the views or policy of Multimedia Group Limited.
Tags:
2020 Elections
James Agyenim-Boateng
John Dramani Mahama
NDC