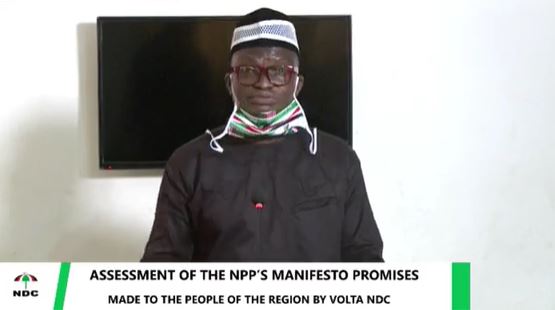 The National Democratic Congress (NDC) has scored the Akufo-Addo-led-government 17% on the delivery of campaign promises made to the Volta Region.

The opposition party asserted that out of 17 campaign promises, only 3 had been delivered in the 3 and a half year administration of the governing New Patriotic Party (NPP).

The NDC Volta Regional Communications Officer, Kafui Agbleze indicated that President Akufo-Addo’s said failure to deliver on his promises clearly indicates he is not committed to ”marrying the region” as he touted during the 2016 electioneering.

“I will be very very charitable in my presentation and with what I have done so far to give his excellency President Akufo-Addo with the promises tha he has made to the people of the region and what he has done so far 17%,” he said when speaking at a press encounter in Ho.

“And if he [President Akufo-Addo] should sit in a classroom and he’s gotten 17%, definitely this is a failed score”, Mr Agbleze added.

He further indicated that the government failed to deliver on the One District, One Factory, construction of the Keta Harbor, and a landing site and storage facility in Keta, completion of the Eastern Corridor Road and disbursement of $1 million per a Constituency promises.

Mr Agbleze outlined that promises to expand existing district hospitals and construct hospitals for newly created districts, increase access to potable water, construction of a large sitting theater, industrial park, provision of wifi in second-cycle and tertiary institutions, industrial park among others are yet to be fulfilled by the President.

He, however, indicated that the government is delivering on the promises of rehabilitating the “severely damaged” 90km Ho-Aflao road as “spot patching is going albeit very slowly”, the constructing of a youth resource center and providing each of the 18 districts and municipalities a warehouse.

He explained that “out of the 18 districts and municipalities in the region, they have only done three [warehouses] and these can be located in Ketu North, Ho and Hohoe Municipalities.”

Mr Agbleze, therefore, asserted that “it is very obvious that people of the region will turn out in their numbers to vote massively for John Mahama because of his unprecedented record in developing the Volta Region.