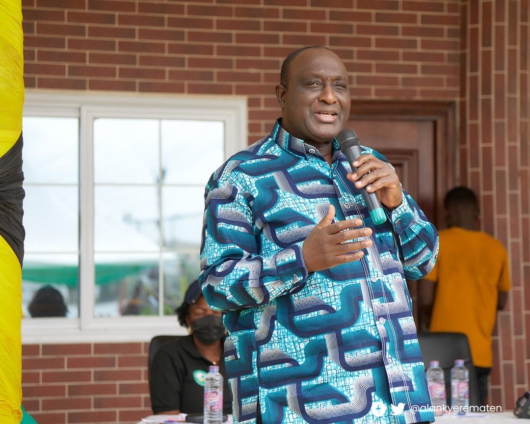 The Northern Regional Communications Directorate of the New Patriotic Party (NPP) has suspended a member of its communication team, Alhaji Ibrahim Kaleem, indefinitely.

In a statement to announce the suspension, the party noted that the act by Alhaji Ibrahim Kaleem to openly endorse Alan Kyerematen as a flagbearer is contrary to the Constitution of the NPP.

“As already noted in Chairman’s statement dated December 30, 2021, the unfortunate situation of peaking before time has the tendency to disrupt H.E. Nana Addo Dankwa Akuffo-Addo’s governance and the peace within the New Patriotic Party in the region.

More so, jingles played, words used among others on the said programme that bring the party and government functionaries into disrepute, cannot be countenanced, especially from a member of the regional communications team. In view of the foregoing, any person who deals with you, Alhaji Ibrahim Kaleem as a member of the Northern Regional Communications team does so at his own risk,” the statement noted.

But speaking on Top Story, on Thursday, Alhaji Ibrahim Kaleem debunked claims of open declaration of support for Alan Kyerematen as flagbearer.

He admitted that he was present at an event organised every Tuesday by ‘Friends of Alan’ to espouse the achievements of Alan Kyerematen as Trades and Industry Minister but never campaigned for him as purported.

He said the accusations are false and misleading.

“It’s absolute lies. It’s not true. The programme was organised by ‘Friends of Alan’ and I happen to go there every Tuesday and it’s not about campaigning. It’s talking about Alan’s Ministry, what he has done, the factories and other things that he has done so it’s absolute lies,” he said.

Alhaji Ibrahim Kaleem urged the party’s leadership to rather go after Members of Parliament and big wigs in the party who have openly declared their support for other party members.