Our party Chairman is not Ekow Ewusi’s boy, don’t tag him to deny him DCE position – Abura Asebu Kwamankese NPP 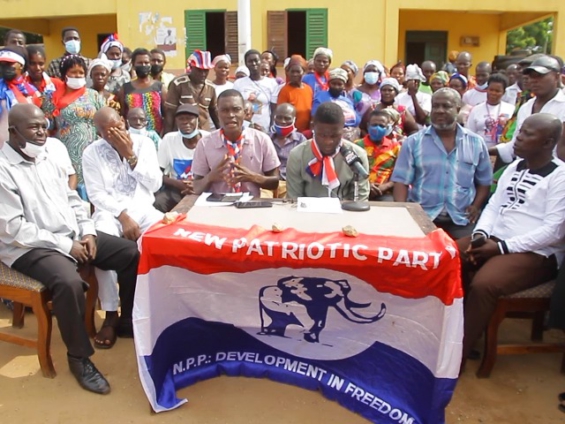 Some executives of the New Patriotic Party (NPP) in the Abura Asebu Kwamankese District of the Central Regional are warning they would not take it kindly if the party’s chairman for the constituency is not given the District Chief Executive (DCE) position just because they have tagged him an associate of Ekow Ewusi.

Ekow Ewusi was the first Vice-Chairman of the party in the Central Region and got suspended.

The Abura Asebu Kwamankese party says, Kwaku Baah Ewudzi, has worked hard as the Party’s constituency chairman and does not deserve a last-minute excuse that he is Ekow Ewusi’s boy and thus, would not be given the position.

Speaking at a news conference at Moree, spokesperson for the Party’s constituency executives, Nana Boison, indicated, the party risks giving up the seat they have held for two consecutive terms if the interest of the party and the grassroot is not considered.

Nana Boison sounded it loud that they would be highly disappointed should Kwaku Baah Ewudzi not be selected as the DCE.

He stressed: “We also want to use this opportunity to clear the ill-conceived notions that Chairman Ewudzi is an Ekow Ewusi boy. We want to place emphatically on record that he pays allegiance to the Regional chairman, and he has supported the regional chairman in discharging his operations till now.”

He added that Kwaku Baah Ewudzi should be saved from this label and tag. “People have intentionally decided to throw in this in order not to give him the position.”

Some of the party folks also charged the MP for the area, Elvis Morris Donkoh, to use his influence to ensure that the party chairman was selected as the DCE. Failure to do so, they say has consequences.

“We shall resist it with all our might if his name is not mentioned as the DCE for Abura Asebu Kwamankese. Someone cannot work like that and be disappointed,” one of the party elders stated.

DISCLAIMER: The Views, Comments, Opinions, Contributions and Statements made by Readers and Contributors on this platform do not necessarily represent the views or policy of Multimedia Group Limited.
Tags:
Abura Asebu Kwamankese
District Chief Executive
NPP