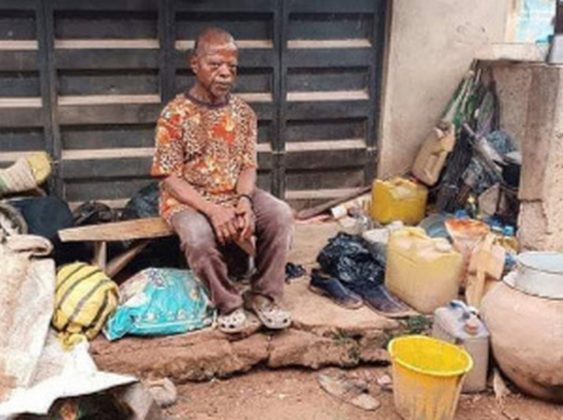 Reports emerged on Monday, July 4, that the Nollywood star is homeless and sleeps in shops and streets in Enugu.

Apostle Chibuzor, in the wake of this news, took to his Twitter page on Monday afternoon to announce that he would offer free accommodation to Mr Aguba in one of the OPM free estates in Port Harcourt.

This came after the clergyman launched a search for the after pictures of him in a dirty environment and made the rounds on the internet.

Veteran Actor, popularly known as Agụba, is reportedly homeless. The place shown in the photos is said to be where he currently lives. pic.twitter.com/q7qCSxVo7S

The Actors Guild of Nigeria, who also confirmed Aguba’s condition in a statement, said it had taken care of Aguba in the last four years by providing him with accommodation and medical interventions until his case degenerated recently.

One of the photos captured the veteran actor crying uncontrollably over the house gift, and another showed where he was lying on a bed.

Meanwhile, Apostle Chibuzor has fulfilled his pledge and a video showing the emotional moment the actor was ushered into his new home has been shared online.

In the heartwarming video, Agbuba struggled to hold back his tears as he was shown around his new home.

DISCLAIMER: The Views, Comments, Opinions, Contributions and Statements made by Readers and Contributors on this platform do not necessarily represent the views or policy of Multimedia Group Limited.
Tags:
Kenneth Aguba
Nollywood