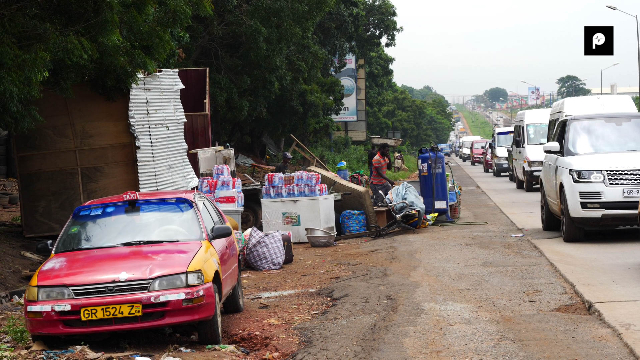 There was huge traffic buildup on the Tema Motorway Wednesday, following a demolition exercise by the Tema West Assembly in Accra.

So far, the Assembly has demolished over 200 wooden structures in the area popularly known as  Kiosk Estate. It is home to over 500 squatters along the motorway.

One of the affected squatters told Joy News’ Matilda Wemegah that she does not have anywhere to place her kiosk.

“Someone should please tell the authorities to give us some time because I don’t have anywhere to go right now…are they [government] doing this and expecting us to vote for them come election 2020,” she lamented.

Lost in a sea of carpenters dismantling structure before destruction, while truck pushers, trailer and pick-up drivers standby to cart away belongings, the reporter simply described the atmosphere as chaotic.

The residents are angry that the authorities are not allowing them to take their belongings but are only going ahead to destroy the structures with everything in it.

They claim the Tema West Assembly did not give them prior notice before coming to pull down their structures.

“They should have spoken to the companies around here that employ some of us so they increase our wages and salaries to be able to afford decent houses so we move away.

“Some of us earn between ¢250 and ¢300 which is woefully insufficient to get decent accommodation. We are here because we are hard up and times are hard,” another resident stated.

She blames the unemployment situation in the villages which has forced people like her to come to the capital to eke a living.

“We are only struggling to survive even in these structures. After paying for electricity and other bills you are left with nothing but we are managing,” she added.

However, the Assembly said it has been to Kiosk Estate a number of times to warn the squatters but their warnings have been disregarded.