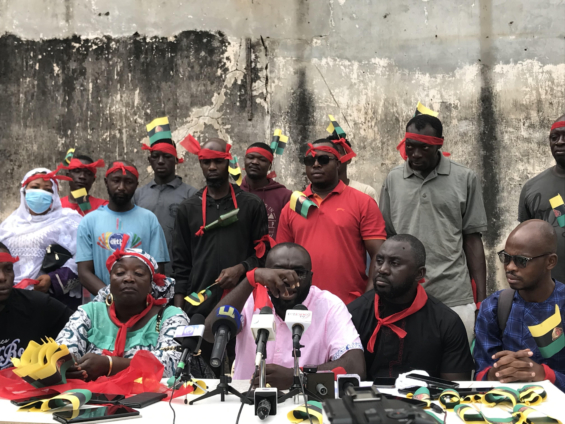 More youth groups in the Ashanti region are mounting pressure on Ashanti Region’s 47 members of parliament to facilitate speedy development of the region.

The Ashanti region, held as the stronghold of the ruling NPP, has suffered major setbacks in infrastructural development.

The latest to join the call on MPs to prioritise development of the region is a youth group from the Asokore Mampong municipality.

The group says they are resolved to foot new parliamentary candidates to contest the incumbent legislators if they fail to impress upon the government to execute and initiate projects in the region.

Clad in red armbands and hoisting the traditional flag of the Asante kingdom, the Asokore Mampong youth vented their displeasure against the stunted development of the region.

The group argues infrastructural developments including roads and hospital facilities have since their sod cutting not seen any advancement.

The Afari and Sewua hospitals are among few health facilities in the region yet to see completion.

With six months into 2022, the four promised interchanges to hit the region are also yet to be realized.

The youth group says it is yet to parliamentarians who represent the region lobby for needed development for the people.

Leader of the group, Osei Akoto called on the leaders to point out projects they have lobbied for the region.

“The leaders have failed to fight for the development of our region including Chairman Wontumi, Asenso Boakye (MP for Bantama), Osei Kyei Mensah Bonsu. What can they boast of since they became MPs and ministers of state? What have they brought? They should challenge us,” he said.

The ruling New Patriotic Party produced over one million votes from the Ashanti region in the 2020 presidential race.

The region also has the highest number of parliamentarians.

Nana Agyenim Boateng, who is with the Concerned Youth for Asante, says the party has failed to develop the Ashanti space given the massive votes it garnered from the region.

“We don’t just vote for the sake of it. We vote for development. Former President Mahama garnered fewer votes from the region but he did more for the region. John Mahama is the best so far who has done development in the Ashanti region compared to the votes we gave to them,” he said.

He describes the situation as a “deliberate action to suppress” the region.

The Asokore Mampong youth have to this end, served a one-week ultimatum demanding answers from the Ashanti caucus in parliament or face their wrath.

“If they think what we are doing is a child’s play then they should wait. This is just a tip of the iceberg. We are giving them just one week to respond to our demands. Failure to do so we are going to embark on a massive demonstration that will shock them,” Osei Akoto emphasized.

Similar press conference was held by the youth of Bantama last week.