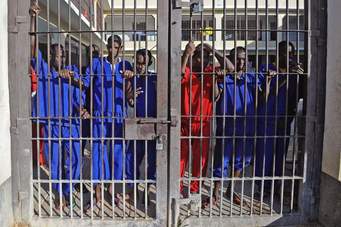 The Ghana Prisons Service (GPS) has called on the Government to as a matter of urgency and on humanitarian grounds, increase the daily feeding allowance for the upkeep of prisoners across the country.

The Central Regional Public Relations Officer of the Service, Superintendent Vincent Ziniel made the appeal saying that the increment would ensure adequate and nutritious meals for inmates at all times.

“Even though we appreciate the effort of the government, we are still asking for more in order to cater for the basic needs of inmates.

“The current feeding grant of GH₵ 1.80 per inmate is woefully inadequate and we are pleading with the government to review the rate,” he said.

He was speaking in an interview with the Ghana News Agency in Cape Coast on Tuesday.

Notwithstanding, Supt. Ziniel appreciated the efforts by government to reform the Service to deliver its mandate of providing safe custody of prisoners and to ensure their welfare, reformation and rehabilitation.

Furthermore, Sup. Ziniel urged the government to resource the various prison infirmaries with the right quantities of pharmaceuticals, logistics and personnel to provide medical care for both inmates and officers of the Service.

Citing challenges at the Ankaful Maximum Prison to buttress his appeal, Sup. Ziniel said the facility lacked drugs to support its infirmary services, mattresses, logistics and infrastructure to deliver on its mandate.

“Currently, we have some drugs but they are not enough to cater for inmates here. Our mattresses, food, logistics and infrastructure are woefully inadequate to support our inmates’ services,” he added.

In the absence of these essential items, Sup. Ziniel assured that the Deputy Director of Prisons, Dominic Nicholas Arthur, the Central Regional Commander and team were determined to go all out to ensure the health and welfare of inmates across the Region were improved.

“The Regional Commander has been buying drugs for inmates when the infirmary run out of stock. Other times, we take sick inmates to designated hospitals and look for money by ourselves to pay for their bills because we can’t watch sick inmates die.

“We have also been getting support from religious organizations, corporate entities, individuals and families of inmates,” he said, and pleaded with all to support the Service,” he revealed.

Sup. Ziniel reiterated the Command’s commitment to ensure that the Service purged itself of all miscreant officers who connive and condone with criminals to dent the reputation of the Service.

He announced that the Service in the year 2020 succeeded in arresting more than 10 officers and some civilians.

Some of the officers he said were interdicted and together with the civilians were processed for court for various offences, to serve as a deterrent to others.

DISCLAIMER: The Views, Comments, Opinions, Contributions and Statements made by Readers and Contributors on this platform do not necessarily represent the views or policy of Multimedia Group Limited.
Tags:
Ghana Police Service
Ghana Prisons Service
JoyNews