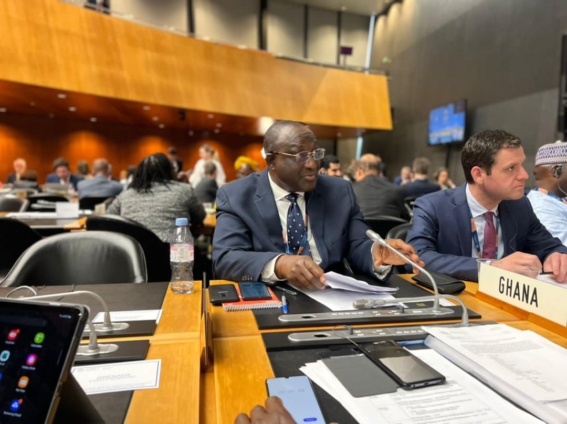 The Minister of Trade and Industry, Alan Kyerematen has called for reforms within the World Trade Organisation (WTO) to make it work better.

In a statement at the plenary session of the twelfth ministerial conference of the World Trade Organization, which opened on June 12, in Geneva, Switzerland, he said, “it is indeed a matter of great concern to some of us who have been in and out of these Ministerial meetings over the last 20 years that we are still being confronted with the same issues that have been tabled before us over two decades,” adding that, “this clearly points to the need for serious structural reforms in the WTO.”

The Ministerial Conference is the topmost decision-making body of the WTO and meets every two years. It brings together all members of the WTO, all of which are countries or customs unions and take decisions on all matters under any of the multilateral trade agreements.

“As members, we will need to take a critical look at the architecture of negotiations. Ministerial conferences are not supposed to be an extension of negotiations which are the responsibility of our technical teams,” Mr Kerematen said.

He said the collective strength as members of the WTO is required at the  Ministerial Conference to restore hope and confidence in the multilateral trading system.

“As Ministers, when we gather at these conferences, we do so to make concrete decisions. I wish therefore to appeal to you my colleague Ministers to rise above the interests of our individual countries, to accommodate flexibilities which will unlock otherwise difficult bargaining positions,” Mr Kyerematen said.

Mr Kyerematen said the paralyzing effect of the principle of single undertaking for a large organization such as the WTO,  was that there was the need for deeper reflection for a diverse membership and different areas of interests.

He said, “it will be a tragedy of history for us to leave this Conference, without securing concrete outcomes which will anchor the expectations of developing and least developed countries, in using trade to help reboot their economies.

He proposed the granting of a waiver through the Trade-Related Aspects of Intellectual Property Rights (TRIPS) Council to empower Members to produce vaccines, diagnostics, and therapeutics for especially developing and least developing-country members, with a view to alleviating their suffering, and expediting the global recovery process.

TRIPS plays a central role in facilitating trade in knowledge and creativity, in resolving trade disputes over IP, and in assuring WTO members the latitude to achieve their domestic policy objectives

“At the national level, Ghana is in the process of establishing a Vaccine Manufacturing plant and a National Vaccine Institute to facilitate the production of vaccines,” Mr Kyerematen said.

On agriculture, he reiterated the negative effects of domestic support measures of some developed-country members, which have serious implications for agricultural development and rural livelihood improvement.

He added that “correcting the existing distortions and systemic imbalances in agriculture trade, particularly through disciplines on domestic support is, therefore, a priority at this Ministerial conference.”

Mr Kyerematen said Ghana supports the draft Ministerial Decision on Food Insecurity in Net Food Importing Developing Countries (NFIDCs) and LDCs and called upon all WTO Members to adopt this decision at the conference, adding that, there was the need for  a balanced outcome on the agreement on Fisheries that adheres to the mandate of SDG1, 4, 6.

“Any outcome at this conference must safeguard the economic livelihoods of subsistence and artisanal fisher folks through meaningful Special and Differential Treatment provisions,” he said.

He said Ghana  supports the call for the reinstitution of a fully functional dispute settlement mechanism, including the appellate body, in order to re-establish trust, security and predictability in the WTO.

Mr. Kyherematen said the combined effects of the COVID-19 pandemic and the Russia-Ukraine conflict have shaken the very foundations of the multilateral trading regime, adding that, “the headwinds against free trade have been so strong that if there was ever a time that the role and mandate of the WTO is being seriously questioned, then that time is now. “