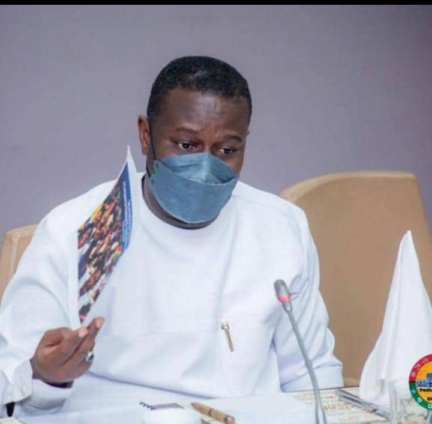 The Majority Chief Whip of Parliament, Frank Annoh-Dompreh, has admonished his colleague Members of Parliament (MPs), especially those belonging to the opposition National Democratic Congress (NDC), to never launch an attack on the Speaker’s chair again.

Such acts, he noted, is akin to the numerous coup d’états the West African sub-region has witnessed in recent months.

To him, MPs, classified among the ruling class, must be seen to be championing democracy wherever they find themselves, stressing that any act contrary to that will derail the gains Ghana has made in its democratic dispensation.

Contributing to a statement made by the NDC MP for North Tongu, Samuel Okudzeto Ablakwa, to condemn the successive coup d’états in Mali, Guinea and Burkina Faso, and the recent attempted coup in Burkina Faso, Annoh-Dompreh who is also the NPP MP for Nsawam-Adoagyiri, said attacks on the Speaker’s chair by the NDC MPs during the previous meeting could best be described as a coup d’état, urging all to reflect on the distasteful act and purge themselves.

“It cannot be justified under any circumstance that Members of Parliament will reduce intellectual arguments into fisticuffs and we have people who were targeting the seat of the Speaker. It cannot be that. And if you are continuously engaged in that, you are preparing the grounds for the unfortunate.

“It is high time we also reflect. Growing up as a leader, I have never seen MPs going after the Speaker’s seat, I have never seen that. Both sides we need to reflect. The ruling class must reflect and we are part of the ruling class. We cannot at one time or at one hand condemn coup d’état and at another hand surreptitiously and physically trying to attack the Speaker of Parliament. For me, that is a form of a coup d’état. Anybody that engages in fisticuff in Parliament here is fueling and facilitating a coup d’état and must be condemned in no uncertain terms”, he noted.

During the consideration and approval of the 2022 budget late November last year, a disagreement ensued in the House following accusations by the Minority that the First Deputy Speaker of Parliament, Joseph Osei Owusu who chaired the sitting erred in counting himself as part of the Majority to form a quorum to overturn their decision and approve the budget.

This resulted in hearted arguments in the House leading to the NDC MP for Ashaiman, Ernest Norgbey, taking the Speaker’s chair from its original position.

Norgbey commenting on his action told journalists that he was preserving the seat for the Speaker of Parliament, Alban Sumana Kingsford Bagbin, who was on a medical leave in Dubai in the United Arab Emirates.

Also on December 21, 2021, a brawl broke out in Parliament during a late-night sitting over government’s proposed Electronic Transaction Levy (E-Levy).

Members from both sides of the House shoved, pushed and threw punches at each other while others tried to separate them. It took the intervention of the Minority Leader, Haruna Iddrisu, to let sanity prevail in the House.

This was after some NDC MPs had rushed forward to take the Speaker’s Chair and prevent the Second Deputy Speaker of Parliament, Andrews Asiamah, from taking over the Chair to enable the First Deputy Speaker, Joe Wise, who was then presiding over the sitting to take part in a voting exercise over the controversial E-Levy.

The opposition NDC MPs had rejected the proposed E-Levy of 1.75% on electronic transfers which included mobile-money payments.

However, Annoh-Dompreh reflecting over those scenes, told Parliament that never should such acts be repeated in the chamber, urging all MPs to say not to fisticuffs on the floor of the House.

“This statement is timely and I want and I want to sound a word of caution that if we don’t reflect positively and show the way in terms of democracy, we are leading this country into a danger and posterity will not forgive this 8th Parliament if this will continue”, he asserted.

DISCLAIMER: The Views, Comments, Opinions, Contributions and Statements made by Readers and Contributors on this platform do not necessarily represent the views or policy of Multimedia Group Limited.
Tags:
Frank Annoh-Dompreh
NDC