Singapore’s investments in Ghana to shoot up 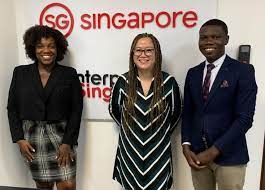 Investments from Singapore in Ghana are expected to go up as more multinational firms from the Far East country are eyeing establishments in the country.

This is being facilitated by Enterprise Singapore which is expected to host an African Business Forum later this month in Accra.

The move is expected to help create jobs for the many unemployed graduates.

Olam Ghana and Wilmar Africa are some of the Singaporean companies operating here.

Jean Ng is the Regional Director for Enterprise Singapore in charge of West and Central Africa and said Singaporean companies are interested in setting up manufacturing plants in the country.

“Naturally, there would be some companies that in the shorter term are more ready to set up the required manufacturing plants to leverage the AfCFTA (African Continental Free Trade Agreement). But in the longer term, companies from Singapore will look to assess the on-ground potential; they will do some level of trading, distribution, import and exports and then look to basically setup their manufacturing plants later.

In line with Enterprise Singapore’s key role in developing Singapore’s startup ecosystem, the agency is focusing on the following strategies of 5 pillars:

They are to deepen global connections that is build connections to global startup ecosystems to support Singaporean startups to internationalise and attract global startups, catalyse more platforms for co-innovation and deployment, strengthen human capital and catalyse financing opportunities and create network of infrastructure to support startups.

From independence in 1965 to today, Singapore has developed significantly through urbanisation, and economically into a modern, global city in Asia.

Over the last 50 years, Singapore’s economy has grown rapidly with Gross Domestic Product at $344.85 billion. GDP pare Capita is also estimated at $66,663.

In the nation’s early years, the economy focused on job creation in the 1960s to moving up the value chain in the 90s with technologically advanced industries, followed by research and development intensive industries in the new millennium.

Trade between Singapore and Africa has been steady with Compound Annual Growth Rate growth of +7.6% over 5 years, and the Far East Asian country is amongst the top 10 investors in Africa