StanChart proud to StandRed with Liverpool FC for 10 years - MyJoyOnline.com

StanChart proud to StandRed with Liverpool FC for 10 years 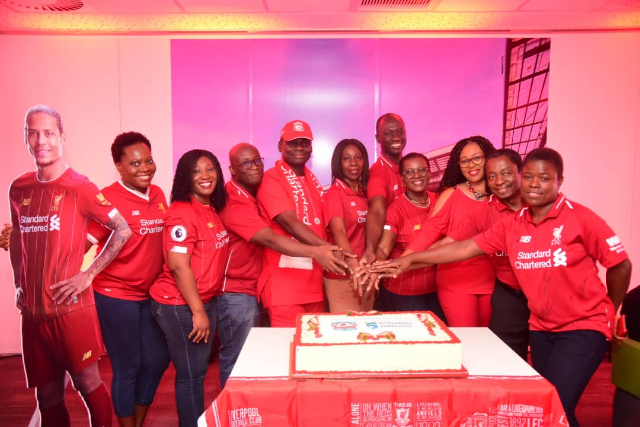 Standard Chartered has been the Official Main Partner of Liverpool FC (LFC) since 2010 and this year marks the 10th anniversary of the longstanding partnership.

As part of the celebrations of this important milestone, the Bank created the event – Red for a Day – where employees around the globe unite around the power of partnership and wore red for a day, on Friday, January 17, 2020.

Staff in the Bank all wearing red joined the Management Team to kick off the day with the cutting of a celebratory cake.

A special Anfield Red Room has been set up with various games to celebrate the 10th anniversary of the Standard Chartered-LFC partnership.

The Bank will also host a live match viewing party for staff, clients and all stakeholders to watch one of the most anticipated games of the Premier League season with LFC taking on Manchester United FC at Anfield on Sunday, January 20, at AM & PM.

The Bank renewed its sponsorship contract with LFC in 2018 and the relationship with the Club would extend to the end of the 2022-23 season, making it the second-longest sponsorship deal in Reds’ history.