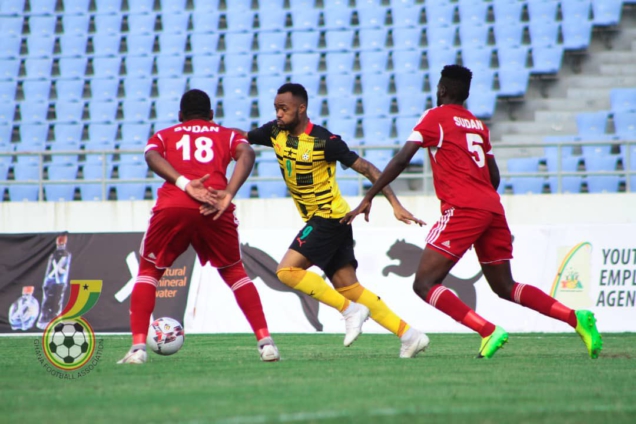 CK Akonnor’s first competitive game in charge of the Black Stars ended in a 2-0 win in Cape Coast. Skipper Andre Ayew came up with both goals to secure 3 points in the qualifying group. Now let’s look at the finer details: how did the Black Stars actually fare in the game? Did they play well?

Akonnor continued with the 4-4-2/4-2-3-1 system against Qatar; so far this system looks like the preferred system for future Black Stars games.

The team set-up in a 4-4-2/4-2-3-1 shape with Afriyie Acquah and Emmanuel Lomotey anchoring a front 4 of Tarique Fosu, Samuel Owusu, Andre Ayew and Jordan Ayew.

During the build up phase, there were 6 players involved; the back 4 and the two Central Midfielders. Through circulating the ball and player rotation, the midfielders were able to receive the ball before finding any of the front 4 operating between the lines.

This was Ghana’s main route to goal.

The main issue throughout the game was getting the ball into the feet of the attackers. During periods of the game, the attackers had to drop very deep to receive the ball before initiating plays leaving less men up the field to attack.

The midfield pairing of Lomotey and Acquah did very little to help the issue. On the ball they were not progressive enough to get the ball to the attackers and as such many attacks were down to individual moments of brilliance.

The disconnect between the midfield and attack also meant that the attackers were sometimes over-elaborating on the ball and that disrupted the structure and spacing in the attack. Too often one attacker would drift to the flanks to occupy the space of another players, causing ball progression to be stale and often slow. This led to moments in the game where about 3-4 players were standing in the same area.

Fosu, Andre and Jordan Ayew often had to make/create their own shots and the frustration showed. At some points in the match they just decided to shoot anytime there was an opening.

The issues of the midfield not being progressive enough could have been as a result of the positioning of the attack, far too often in the match there was zero presence between the lines, almost no one was showing for the ball.

The few times that a player received between the lines there was no one to combine with and the ball was passed back to Ghana’s half.

Defensively, the same issues from the Mali and Qatar games popped up; the midfield was getting bypassed a bit too easily and left defenders 1v1 which was the main source of Sudan’s chances.

The Black Stars’ defensive shape on paper was supposed to be a 4-4-2 block, for most moments in the game they did a good job but during transition, the team looked all over the place.

The fullbacks Baba Rahman and Christopher Nettey were exposed a bit too much at times and if the Sudanese team had a bit of quality, they could have punished Ghana.