The Black Stars 10 – No 1, Asamoah Gyan – A global icon made for big occasions 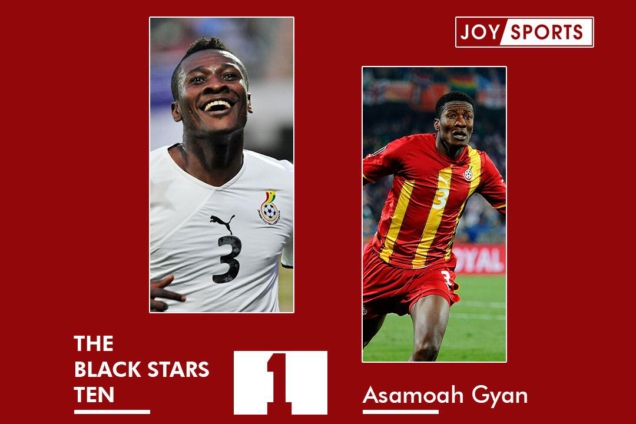 Ask Asamoah Gyan what makes him great, and there will barely be a mention of his unbelievable hold-up play, incredible understanding of space or his effortless finishing.

His biggest asset over the years has been his strong mentality, especially in big games.

Ghana were in the round of 16 of the World Cup for the second successive time. This time, it was on more familiar soil in South Africa. The Black Stars were impressive in the group stage yet again, this time finishing second behind Germany.

In 2006, the Black Stars led by coach Ratomir Dujković met a much stronger side in Brazil and were knocked out. Four years later, opponents USA were not deemed stronger than the Black Stars. In fact, it was a fixture the West African side were getting acquainted to. Ghana had defeated the Americans in the previous World Cup 2-1.

The stage was set for the Black Stars to make history when they faced the USA at the Royal Bafokeng Stadium in Rustenburg. The match was watched by 19 million Americans, making it the most-watched association football match in American television history.

Ghana took the lead through Kevin-Prince Boateng and USA equalised through a penalty by Landon Donovan. However, it was Asamoah Gyan, the man for the big moment that scored the winning goal. Andre Ayew hoofed the ball upfront as Gyan beat Carlos Bocanegra and Jay DeMerit in a foot race, shook off the former, looked at the goal before firing a left-footed volley past Tim Howard.

History remembers Gyan as the player who led Ghana to its first-ever quarter-final appearance in a World Cup. That goal was special, but to the 34-year-old it wasn’t special enough to become his favourite goal.

“I have scored a lot of goals as everybody knows but I will say the goal I scored against Somalia in 2003 is my memorable goal as it was my debut appearance for my country at the senior level.”

It was three days before Gyan turned 18. The former Sunderland man’s birthday gift came earlier as the striker was handed his Black Stars debut. He came on for Isaac Boakye against Somalia in the 2006 World Cup qualifier and scored making him the youngest player to ever score for Ghana.

It was a moment that opened Gyan’s eyes to everything a striker could be. He went on to score three more goals to take his tally to four goals in seven games during that historic World Cup qualifying campaign.

That was the beginning of history written by Baby Jet – as he will later be called.

At age 20, one would have thought the World Cup would faze Gyan after failing to find the net in the team’s opening game against Italy. The world witnessed a player who was ready to become a global icon as he announced his presence within seconds of the second game.

Fans had barely settled when Gyan fired Ghana in front against Czech Republic; a team ranked second in the FIFA World rankings at the time.

“I remember the goal came after one minute eight seconds. It was one of the fastest goals of the tournament. I have many great moments but that was my greatest moment,” Gyan recounts the special moment with BBC Sport Africa.

That was his first World Cup goal and two World Cups later, he now holds the record of being Africa’s greatest marksman at the competition with six goals.

Six goals in three World Cups is an astounding achievement considering that Lionel Messi has also scored the same number of goals in more appearances.

In 2003, when Gyan was subbed on for his Ghana debut, the country had hope of qualifying for its first ever World Cup. However, the consistency of Gyan saw the country qualify for three successive World Cups as he contributed to 10 goals in qualifiers.

Gyan’s consistency once again resurfaces when breaking down his performances in major tournaments. The 34-year-old’s 14 goals in major competitions spread across 11 years makes him on the most reliable strikers internationally.

Until the 2019 AFCON, Gyan was Ghana’s leading scorer at the continental showpiece with eight goals, however, Andre Ayew now holds that feat with nine goals.

Nonetheless, one goalscoring record which the former Sunderland striker will hold for a lengthy period is being Ghana’s all-time top scorer.

Gyan has engrained his name in Ghana’s football history. 51 goals in a record 109 appearances for the Black Stars sees him as the nation’s all-time top scorer.

One would need more than 10 fingers to count the difference between Gyan and the late Kwasi Owusu who scored 36 goals for the Black Stars.

People tend to remember Gyan for that penalty miss against Uruguay. Well, that certainly is one way to look at it. But another way is to look at that sequence demonstrating a player with an elite level of courage of mental strength.

Here’s the case; Gyan had missed a crucial last-minute penalty against Uruguay. If he had scored Ghana will become the first African country to reach the semi-finals of the World Cup.

He missed, and as a result, the game had to go to penalties. Every player would be broken, but very few would return to the spot that left their heart in pieces. Gyan requested to be first on the shootout list and buried his effort past Muslera.

Ghana lost after the shootout, but Gyan’s confidence, courage and elite mentality gleamed at the FNB stadium.

Even at 34 years, Gyan is still putting Ghana first as he has returned to the local league in a bid to boost the marketability of the league.

There may counterarguments that he is making a ton of money but a key question should be asked. Why is he the first amongst his peers to return to the Ghana Premier League?

Hopefully, his return will spark a chain reaction of Ghana internationals returning to the league that gave them everything. So far, global brands such as FIFA and CAF have wished the former Ghana captain well on his return home, once again highlighting his largescale influence.

But for now, Gyan is here and that’s all that matters, he is carving out the finishing touches of what has been an extraordinary career. He hasn’t officially retired from the Black Stars and hence is still available for call-ups, although his call-up looks unlikely.

But no matter how you look at both coins of Gyan’s Ghana career, you’d see a player who gave his all whenever he donned the colours of the national team.

You may hate him or you may love him, but Gyan will remain Ghana’s greatest player in the past 20 years because he pinned the Black Stars on the map with all his mind-blowing accomplishments.

Maybe it’s time Ghanaians celebrated him for what he achieved with the national team.

If this is your first time reading an episode of ‘The Black Stars’ series. You can read the other episodes below:

DISCLAIMER: The Views, Comments, Opinions, Contributions and Statements made by Readers and Contributors on this platform do not necessarily represent the views or policy of Multimedia Group Limited.
Tags:
Asamoah Gyan
Black Stars
Joy Sports
The Black Stars 10