Social media was awash on Thursday, with photos of a reconciliatory meeting between Shatta Wale and Stonebwoy who announced they had smoked the peace pipe.

Details have, however, emerged Friday morning about the man behind what many have, until yesterday, considered the impossible.

The peace deal, according to adomonline.com checks, was brokered by one Kofi Amoa-Abban, a Ghanaian Oil and Gas entrepreneur and philanthropist.

Mr Abban who is the founder and CEO of Rigworld Group, an oil services business with operations across West Africa, is said to be the one who impressed upon the two dancehall acts to extend the olive branch to each other and ensured it happens.

Outgoing President of the Musicians Union of Ghana, Bice Osei Kuffour, popularly known as Obour, posted a photo of Mr Abban on Instagram, thanking him for the ground-breaking gesture.

Renowned journalist, Nana Aba Anamoah who appeared in the reconciliatory photos making the round, also eulogised Mr Abban, thanking him for the significant role of bringing peace to the music industry.

She posted: “Dr Kofi Amoah Abban, my respect for you as a brother have gone another ladder higher. Our music industry will forever be grateful for this historic smoking of Peace @stonebwoyb and @shattawalenima
I doff my hat for you Sir and @thenanaaba. Thank you for doing this for us all.  Let Peace and Unity remain among brothers,” he said. 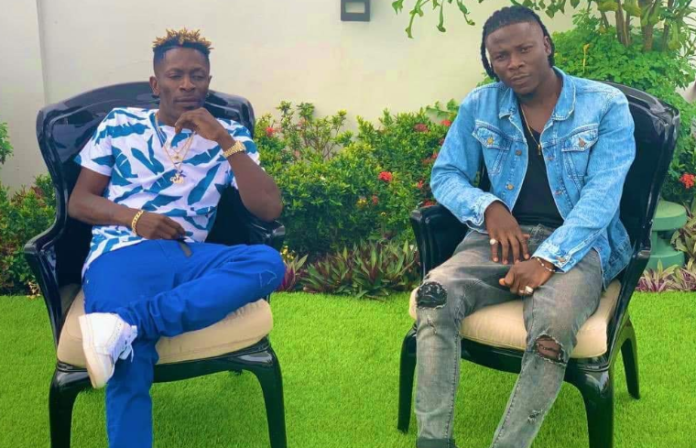 The artistes themselves appear to have breathed a sigh of relief after the many years of rancour and feuding that have recently reached disturbing levels.

The duo took to their social media handles shortly after photos of their meeting emerged.

“”ªUnity is strength ”¬ ”ªLove is the key to many doors ”¬ ”ªBrotherhood is Loyalty ”¬ ”ªPeace is Freedom ..”¬ ”ªMy brother and I got a great vision for Ghana music and we taking it to the world

Stonebwoy also went philosophical, saying “If it be Possible As Far It Depends On You, Live Peaceably With All Men. Romans 12:18. The Wise Shall Inherit Glory… But Shame Shall Be The Promotion Of Fools… Proverbs 3:35”.

From all indications, followers of the two acts are also elated by the peace deal and are expected to embrace the peace treaty.