The viral lynching that was to end Nigeria’s mob justice 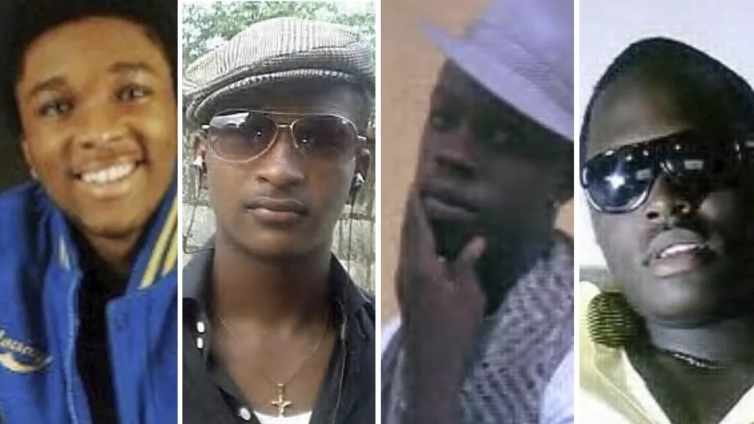 Ugonna Obuzor, Tekena Elkanah, Chiadika Biringa and Lloyd Toku (left to right) were in their late teens and early 20s

Jane Toku sheds no tears as she recalls the moment when she saw the smouldering remains of her son’s corpse on the morning he and three of his friends were lynched 10 years ago.

The four students had run into a local vigilante group at dawn in Aluu, a community behind the University of Port Harcourt in southern Nigeria’s oil capital.

There had been a spate of robberies in the area and at that time of the morning, people became suspicious. Accused of being petty thieves, the four – Llody Toku, Ugonna Obuzor, Chiadika Biringa and Tekena Elkanah – were given a mock trial and found guilty.

Their punishment was handed out immediately: they were stripped, marched around the community, brutally beaten and set alight by the mob as thousands watched and filmed.

“When I arrived, I forced my way through the crowd and knelt before my son’s corpse.

“His friend Tekena was barely breathing, I watched his chest heave with his last breaths,” Mrs Toku said.

Such mob killings are not uncommon in Nigeria but this was the first to go viral on social media, causing widespread outrage, protests and debates about the country’s judicial system, and questions about a society where people resort to such levels of violence.

“One is tired and sick of coming here to lament after these dastardly acts,” a lawmaker said at the time when the incident was discussed at the National Assembly.

“It is important for ‘jungle justice’ to be stopped – it is bad,” said radio host Yaw, as celebrities condemned the incident.

But despite the shock and anger over the killing of the students, now known as the Aluu Four, and the sentencing of three men including one police officer, for their roles in the lynching, mob attacks continue to happen in Nigeria.

There have been 391 mob killings in Nigeria since 2019, according to SBM Intelligence, a Lagos-based think-tank, with at least five this year alone.

That begs the question why the outrage over the killing of the Aluu Four didn’t lead to a national reckoning over lynchings.

“The failure of the criminal justice system is one very important reason for this,” said Dr Agwanwo Destiny, a criminologist at the sociology department of the University of Port Harcourt.

He pointed to instances where criminal suspects handed over to the police were released without investigation and ended up seeking revenge on those who had given them up.

“Such incidents erode trust in the judicial system, so when people are alleged to have committed a crime, people are quick to pass judgement and vent their frustrations,” Dr Destiny said.

It is an argument also made by activist Annkio Briggs, who led demonstrations in Port Harcourt to demand justice for the students and their families, because she “couldn’t trust the system to do what was right,” she told the BBC.

Perpetrators of mob killings in Nigeria are rarely arrested and prosecuted.

Two suspects arrested in May after the lynching of a Christian student on allegations of blasphemy in Sokoto have still not been brought to trial, while the police said the main culprits are still at large.

It was one of four reported cases of mob killing in that month alone:

Suspects have been charged in all cases, the police said. But it might be years before there are any verdicts because of the slow pace of justice in Nigeria.

Two years ago, Nigeria’s anti-corruption agency, the ICPC, said the judiciary was the most corrupt arm of government in the country. It said that more than nine billion naira ($21m; £19m) was offered and paid as bribes in the sector.

Such reports indicating that justice is for sale to the highest bidder erode trust in the system, said Dr Destiny.

It has never been determined what the four students were doing when they were stopped by the vigilante group in Aluu.

“He was not a perfect child but he was humble and he was our confidant.

“He was close to us because we had our second child 11 years after him,” Mrs Toku said of her son.

The four students, best friends, were in their late teens and early 20s and came from middle-class homes.

Ugonna, 18, and his friend Lloyd, 19 – known as Tipsy and Big L – were budding musicians in Port Harcourt’s rap scene.

One of their three unreleased songs Love In The City could almost be a prophesy of what befell them.

We embrace the street life cos

There’s no love in the heart of the city

How can the seeds grow when the garden is weary

“There can be no justification, no reason why anybody should die like that,” said their friend Gloria During, who lived in the same Hilton hostel in Aluu as both musicians.

Aluu is popular for its private apartments that are rented by students who can’t find accommodation at the university’s insufficient hostels.

At the time it was a small village with many undeveloped plots and a population that were mostly farmers.

Today, Port Harcourt’s sprawling metropolis has caught up with the fringes of Aluu – most of the land has been built on by Pentecostal churches and more hostels have sprung up.

But in the centre of the community remains two barren plots, the playground where the students were first held and death pronounced on them, and the burrow-pit, several hundred yards away, where they were marched to, beaten and killed.

Despite the nationwide shock when the incident happened, time has allowed most of Nigeria to move on.

But for a mother, time is a keen reminder of the loss of a beloved first son with a bright future ahead of him.

“He had a bright career in music, he would have gone far by now,” Mrs Toku said.

DISCLAIMER: The Views, Comments, Opinions, Contributions and Statements made by Readers and Contributors on this platform do not necessarily represent the views or policy of Multimedia Group Limited.
Tags:
Nigeria
Viral lynching