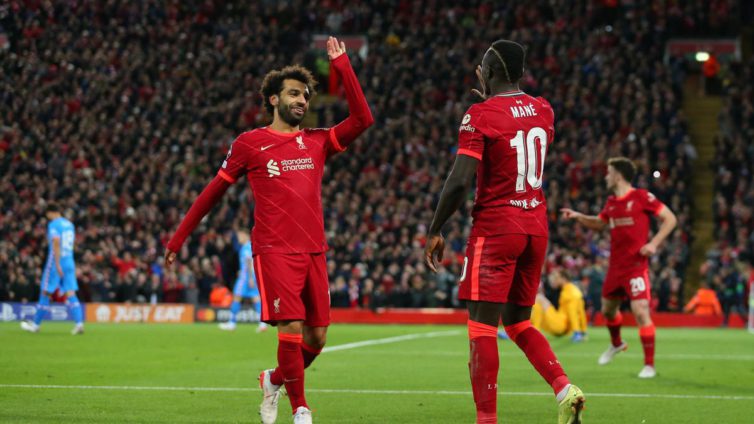 Liverpool swept into the last 16 of the Champions League with a comfortable win over 10-man Atletico Madrid that ensured they will finish top of Group B.

Early goals by Diogo Jota and Sadio Mane, both created by Trent Alexander-Arnold, put the Reds in full command and there was no way back for the Spanish side once Felipe was sent off before half-time.

The win extends Liverpool’s unbeaten start to the season to 16 games and, in total, they have not tasted defeat for 25 matches, dating back to 6 April when they lost to Real Madrid in the quarter-finals of last season’s Champions League.

Sterling converted Ilkay Gundogan’s cutback to score for only the second time this season and claim his first Champions League goal in more than a year.

With Phil Foden and Riyad Mahrez finishing off Joao Cancelo crosses from close range either side of the interval and Gabriel Jesus rolling a shot into the far corner with the final kick of the game, Pep Guardiola’s men were finding winning form after successive defeats by West Ham and Crystal Palace.

The only blot on a routine victory was a freak own goal by John Stones two minutes after City had taken the lead, Bernardo Silva slicing a clearance into the defender’s face and then the net.

City now require a single point from their remaining two group games to seal a spot in the last 16 for the ninth successive season.

Andre Silva then saw his penalty saved before Wijnaldum stabbed in.

The Netherlands player then headed in just before half time but Dominik Szoboszlai equalised with an added-time penalty.

The spot kick was awarded by VAR for a foul by Presnel Kimpembe on Nkunku in the 91st minute.

Elsewhere Karim Benzema’s double took Real Madrid top of Group D as they held off a spirited Shakhtar Donetsk side in the Champions League.

The France forward swept in a second following good work from Vinicius Junior and Casemiro after Fernando had deservedly levelled for Shakhtar.