US releases 300 people after immigration raids

US immigration officials have said they have released some 300 people who were arrested in a massive raid in Mississippi on Wednesday.

Nearly 700 workers from seven agricultural processing plants were arrested for allegedly not having proper documentation to be in the US.

The raids sparked condemnation from Democrats as stories emerged of children separated from their parents.

Officials say they took steps to ensure any children were properly cared for.

Immigration and Customs Enforcement (ICE) said: “approximately 680 removable aliens” had been detained during the operation, which saw agents arriving in buses to question and arrest workers at the plants.

President Donald Trump had announced an immigration crackdown in June, saying “millions of illegal aliens who [had] found their way into the US” would be removed.

What did ICE say?

ICE spokesman Bryan Cox told the BBC on Thursday that those who were not released will be moved to an ICE detention facility and held there.

“The 300 released are released from custody,” he said in an emailed statement. “They were placed into proceedings before the federal immigration courts and will have their day in court at a later date.”

They were given access to phones at the processing site to make arrangements to care for their children. He said those with childcare issues are “expeditiously processed and returned”.

In response to critics who called the raids cruel and harmful to the workers’ children, Mr Cox said the agency had directed two Homeland Security Investigations employees to notify schools of the operation and provide contact details for any children whose parents did not pick them up.

“This agency took extensive steps in planning for this operation to take special care of situations involving adults who may have childcare situations or children at school at the time of their arrest.” 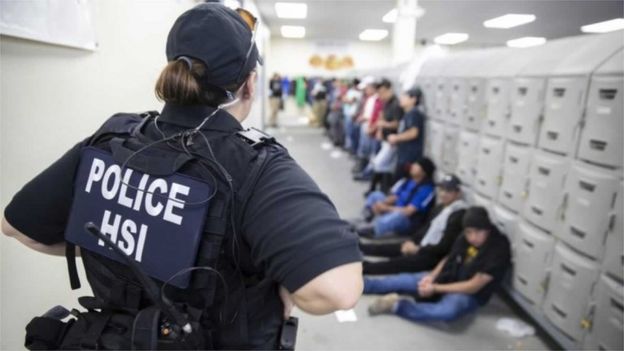 Those detained had been taken to a Mississippi National Guard hangar for questioning.

ICE did not share about the nationality of those detained, but the Mexican government has reportedly sent consular staff to the area to help any of their nationals who may be involved.

What happened at the plants?

About 600 ICE agents arrived at the chicken processing plants, owned by five different companies, in the towns of Bay Springs, Canton, Carthage, Morton, Pelahatchie and Sebastopol.

Friends and family looked on as officers surrounded plants and began to arrest the workers.

At a Mississippi school, the children and family members of immigrants plucked out of their workplaces by federal agents in today”™s historic #ICEraids weep, unsure when or if they”™ll see their loved ones again. Their back to school week. Shared with permission from Miriam Sanchez pic.twitter.com/0vr3CEWPTj

Nora Preciado, a supervising attorney at the National Immigration Law Center (NILC), told the BBC that in many workplace raids, “ICE often singles out people in a discriminatory fashion by focusing only on the Latino workers, and there are many incidents of excessive force during the detention and arrests”.

“These raids are rife with constitutional rights’ violations, including agents having no legal authority to detain or arrest workers based solely on immigration status without probable cause,” she said.

“Generally, regardless of whether released or not, anyone unauthorised will be put into deportation proceedings.”

In the Mississippi raids, officials said they executed federal criminal and administrative search warrants for the arrested individuals.

What happened to the children?

Some children were taken to a local gym after they came home to find their parents gone.

In one video posted on Facebook from the Koch Foods plant in Morton, a young girl can be heard weeping uncontrollably as bystanders watch people being loaded onto a bus.

An officer allows her to see her mother, who is the girl’s only legal guardian, before the buses leave. Because the young girl is a US citizen, her mother will not be deported, the officer says.

According to the Washington Post, the girl’s mother was not released as of Wednesday night.

Ms Preciado of the NILC said research shows raids like this have a “harmful impact on safety, educational success, social and behavioural well-being and overall health of children in immigrant families”.

Scott County schools superintendent Tony McGee told the Clarion Ledger newspaper that one child had started kindergarten on Tuesday, only to have their parent arrested on Wednesday.

Mr McGee said at least six families had a parent detained in the raids, with children ranging in age from kindergarten to high school.

“We’ll worry about the school part of it after we get all this sorted out,” he added. “You can’t expect a child to stay focused on the schoolwork when he’s trying to focus on where Mom and Dad are.”

What’s been the reaction? 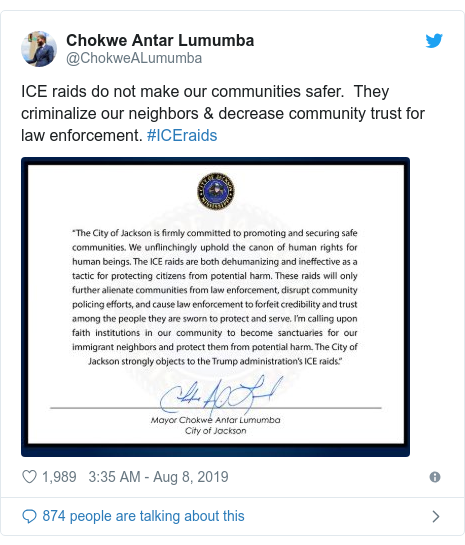 But Mike Hurst, US Attorney for the Southern District of Mississippi, said ICE agents were executing warrants to arrest the “illegal aliens”.

Some Trump supporters on Twitter also backed the agency, saying the law must be enforced. 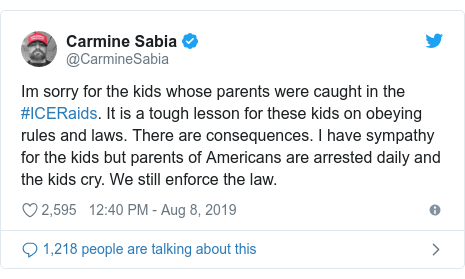 Democratic presidential hopeful Kamala Harris said in a tweet: “These ICE raids are designed to tear families apart, spread fear, and terrorise communities. These children went to daycare and are now returning home without their parents because Trump wants to play politics with their lives.”

“The moral vandalism of this administration has no end – how is traumatsing these kids, abandoning them, making anyone any safer?”