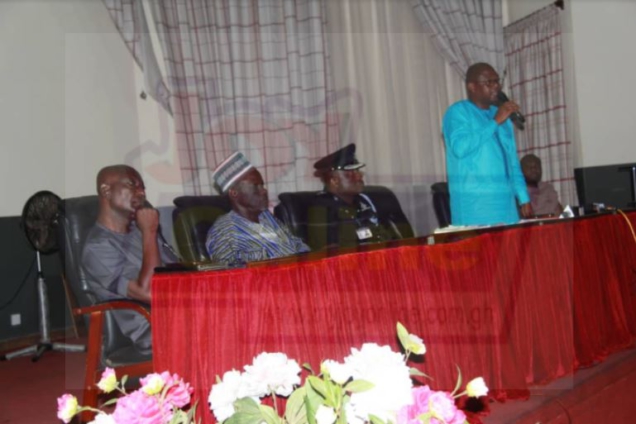 Mayor of the Tamale Metropolitan Assembly, Sule Salifu, has warned that the Assembly will not hesitate to use law enforcement agencies to ensure that traders who have returned to the interchange after decongestion move.

He stated that the assembly would continue to use a human face and dialogue with the traders in order to get them to leave the interchange.

The Tamale Metro Assembly before the commissioning of the interchange embarked on a decongestion exercise and moved the traders to the Kukou market and other satellite markets in the city but the traders have relocated back on the streets.

But speaking at a stakeholder engagement at the Assembly, Mr Sule Salifu said the Assembly’s last resort will be to use the law enforcement agencies to get the place sanitised.

He said he knows activities like these will definitely affect some people and called for cooperation between the traders and the assembly to ensure the place is sanitised.

“Engaging stakeholders in this enterprise is much more results oriented than using force but the Assembly, the GPRTU, the MTTD, the Road Safety Commission will not hesitate to use the law enforcement agencies to get the place sanitised if they fail to move,” he said.

The Northern Regional Commander of the Motor Traffic and Transport Department, Chief Superintendent Mahmud Yussif, told stakeholders trading on the street that placing injurious substances on the road that can cause harm or injury was punishable by law with one to three months in jail or a fine of 25 to 50 penalty units.

“Causing harm to road Users like trading and placing injurious substance on the road that will cause harm to people is an offence and you can go to jail for 1 to 3 months or a fine of 25 to 50 penalty units,” he said.

The Northern Regional Director of the Road Safety Commission, Mohammed Abdul-Samad bemoaned the culture of people running to Opinion Leaders and Chiefs when they are found culpable of the law.

According to him, the interference by the Chiefs and Opinion Leaders is making the work of state officials difficult.

He cited bills boards in the Tamale Metropolis which he said was causing accidents yet the Assembly cannot remove them because of these interferences.

DISCLAIMER: The Views, Comments, Opinions, Contributions and Statements made by Readers and Contributors on this platform do not necessarily represent the views or policy of Multimedia Group Limited.
Tags:
Decongestion
Sule Salifu
Tamale Interchange
Tamale Metropolitan Assembly