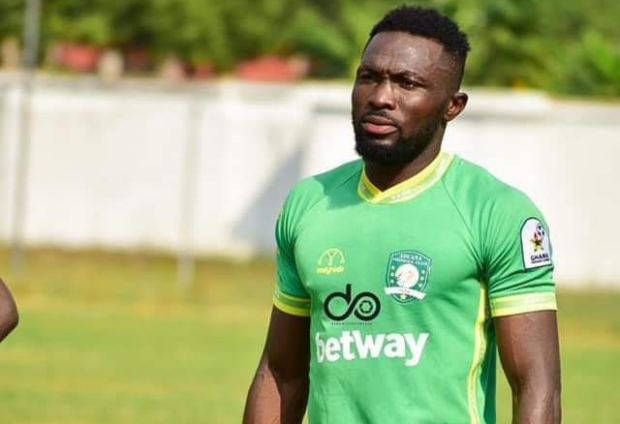 Aduana Stars defender Farouk Adams has been remanded into police custody for two weeks for allegedly crushing a police officer to death.

Adams, 31, was in court for the first time on Thursday after being charged on two counts – careless and inconsiderate driving and negligently causing harm.

His Lordship Osei Kofi Amoako, who presided over the case, ruled that Adams be kept in police custody for a fortnight so the investigation can continue.

Adams will return to court on March 18.

Lawyer Baffour Akoto, who represented Adams in court, was satisfied with the ruling, saying his client will be safe in police custody instead of basic custody, which was an option for the court.

He revealed pleading to the court for Adams to be released on bail, however, prosecutors insisted that the footballer is a flight risk.

How did Adams get into trouble with the police?

Adams was arrested on Tuesday, March 2, 2021 for allegedly knocking a police officer down and leaving him to die.

The incident is said to have happened late Monday, between Asuotiano and Asuhyiae in the Dormaa East District of the Bono Region.

The officer, Constable Amos Mattey of the Wamfie Police station, was alleged to have left his duty post to purchase something but never returned until he was found dead Tuesday morning.

The incident has been described to be a hit-and-run by a Red Toyota Camry with registration number GW 5882-17, driven by the Aduana Stars’ central defender.

The player, who won the NASCO Man of the Match award in week 16 of the Ghana Premier League match between Aduana Stars and Inter Allies at Dormaa, was driving from Sunyani back to Dormaa when the accident happened.

According to sources, the player alleges he knocked down a suspected animal that crossed the car upon which he stopped but found nothing.

The source said he alleges he later parked the car at a nearby fuel station where he called the car owner about the accident and proceeded to the Wamfie Polyclinic to attend to the injury he sustained.

He reportedly later went back to the accident scene with the car owner but again found nothing.

He then left for Dormaa in a different vehicle while a mechanic moved the other car to Sunyani on the orders of the actual owner, the source said.

Farouk Adams alleged it was his friend who later told him the incident had caused the death of one person.

He then reported it to the Dormaa Police station about 1:30 pm Tuesday and was subsequently arrested by the Wamfie Police.

DISCLAIMER: The Views, Comments, Opinions, Contributions and Statements made by Readers and Contributors on this platform do not necessarily represent the views or policy of Multimedia Group Limited.
Tags:
Farouk Adams
Ghana Premier League