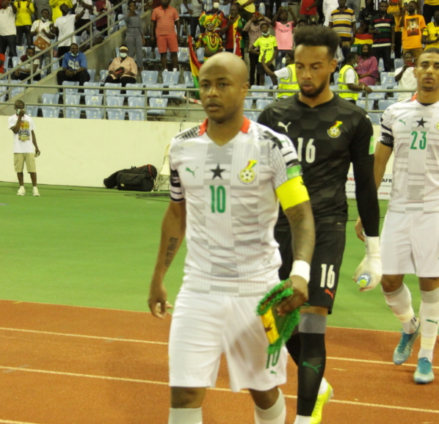 Black Stars captain, Andre Ayew, says he is only thinking about the upcoming 2022 FIFA World Cup amid talks he will be playing his last global showpiece in Qatar.

Ayew was part of Ghana’s 2010 and 2014 World Cup squad after being promoted to the senior team following his success with the Black Satellites in 2009, where they won the Under-20 Africa Cup of Nations as well as the World Cup.

At age 32, many have speculated the forward could be participating in his last World Cup with the Black Stars following Ghana’s qualification to the Mundial at the expense of Nigeria.

But the player has failed to rule out the possibility of playing further on should he main his good form in the years to come.

“I don’t look further than what’s coming,” Ayew said when quizzed about the possibility of Qatar being his last World Cup.

“I think what is important is to keep working, being fit, being able to play numerous games as I am doing. As long as I continue like this, I don’t have an issue.

“We look at a lot of squads – Africa, Europe, players are playing in the national team at 37, 38…So I am not looking at the age, I am looking at me being fit and performing well,” he added.

The former U-20 World Cup winner also revealed there would not be any special plan for the game against Portugal when the Black Stars come up against ‘best player’ Cristiano Ronaldo.

“No plan [for Ronaldo], it will be similar to the other one [2014 World Cup]. It is the first game [against] one of the best teams in the world, the best player in the world. We are going to try and do our best and make our nation proud.

“When you are in the World Cup, you just don’t play for your nation. You play for the whole continent so that is what we are going to look at and try to disturb this very good side and [also] try and make an impact,” he concluded.

Ayew has been directly involved in 19 goals in 24 games in his debut season at Al Sadd, with his side going on to win the Qatari Stars League for the 2021/22 season.

The full interview airs on Tuesday, April 19, 2022, across the Joy platforms.