Authorities of Agate SHS call for improvement in facilities - MyJoyOnline.com

Authorities of Agate SHS call for improvement in facilities 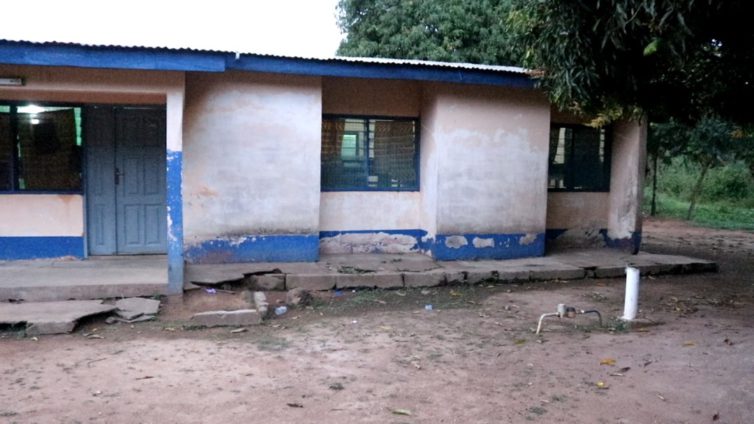 A 38-year-old second-cycle institution in Afadzato South District in the Volta Region with an increasing student population has no befitting facility that will accommodate the students and enhance academic success.

The school located on 69 acres of land donated by the Chiefs and people of Agate only has an 18-unit classroom block situated at the centre of the land which is currently been used for both administration and teaching activities.

The school, since its inception, has seen little renovation and improvement in its infrastructure.

The girl’s bathhouse, the school’s kitchen are both which are housed in open shades behind the 18-unit and are in deplorable states.

The girls are currently housed in the bungalows of the Headmistress, assistant head and senior Housemaster and some of the girls also sleep in 3 of the classrooms.

Some of the students who spoke with Joy News lamented on the lack of dormitories in the school which is making it very difficult for them to concentrate on their studies.

According to them, their bathrooms which is quite a distance from where they sleep.

The students would appreciate it if the girl’s dormitory to be completed so they can move in as soon as possible.

The students also be pleased to have a boy’s dormitory on campus so they can be well monitored by the teachers.

According to the students and the school authorities, the school, although very serene lacks a lot of infrastructure and needs to be addressed urgently.

The school’s kitchen is housed in an open shade with inadequate staff and whenever it rains ,it disturbs the cooking process and makes cooking difficult.

The kitchen according to the metron of the school, Madame Tamekloe lacks modern facilities and still uses the old ones which is worrying to the authorities.

“Our kitchen is in a very bad shape, we wash the dishes outside we don’t have enough kitchen staff and whenever it rains it disturbs us greatly “Mad. Tamekloe lamented

She appealed to the government to come to their aid as soon as possible.

The  Headmistress of the school, Ms. Benedicta Amata Agbezudor during the speech and prize giving day mentioned that numerous challenges negatively affect teaching and learning in the school.

Madame Agbezudor noted that there is inadequate accommodation for staff on campus adding that the assistant headmasters’ bungalow has been converted into dormitory for female students while the male students are forced to use an old dilapidated blocks in the Agate township as a dormitory, which is about 2 kilometres away from the campus.

The Headmistress revealed that, although the school has a strength of teaching staff, non-teaching staff is not adequate

The school also won first position in sporting activities in the region in 2013, 2018 as well as chalking success in inter-school quiz in the Afadzato South District.

The celebration was organised to raise funds for a flagship project for the school, a modern Science, I.C.T Laboratory, which the Headmistress said will go a long way to enhance teaching and learning of science and technology.