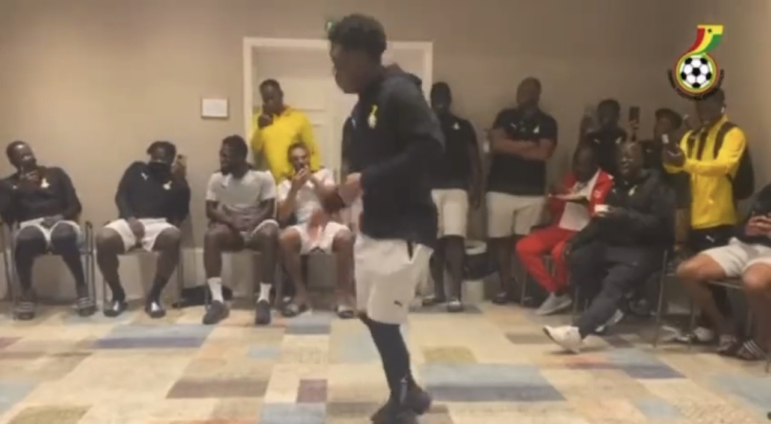 New Black Stars players took to the dance floor on Thursday night to perform their ‘initiation dance’ and they delivered quite the show.

The ‘initiation dance’ has become a ritual with the national team, with newly invited players required to perform a dance as part of their ‘welcome’ to the team.

Five players have earned debut call ups to the team ahead of friendly games against Brazil and Nicaragua, which form part of preparations towards the 2022 FIFA World Cup in Qatar later this year.

Inaki Williams (Athletic Bilbao), Tariq Lamptey (Brighton), Mohammed Salisu (Southampton), Ransford Yeboah (Hamburger SV) and Stephan Ambrosius ( Karlsruher SC) have all been invited to the national team for the first time and were required to show off their dance skills after dinner on Thursday night in France, where the team is based.

Tariq Lamptey, whom his teammates have nicknamed ‘Bobby Short’, was first to the dance floor and well, let’s just leave you to judge.

Next up after Tariq Lamptey, was Inaki Williams, whose moves left every player rolling on the floor with laughter.

Salisu’s moves were quite suspect and you could hear some of his teammates shouting in the background and asking him to ‘change your style’.

Ransford Yeboah was nicknamed “Slim Buster” because of his very unique moves.

Hearts of Oak forward, Daniel Afriyie Barnieh, all though not his first call up, still took to the dance floor to show of some skillful moves.

And yet, it appears the undisputed best dancer in the Black Stars team is Sporting Lisbon youngster, Abdul Fatawu Issahaku.

Who do you think pulled off the best moves?