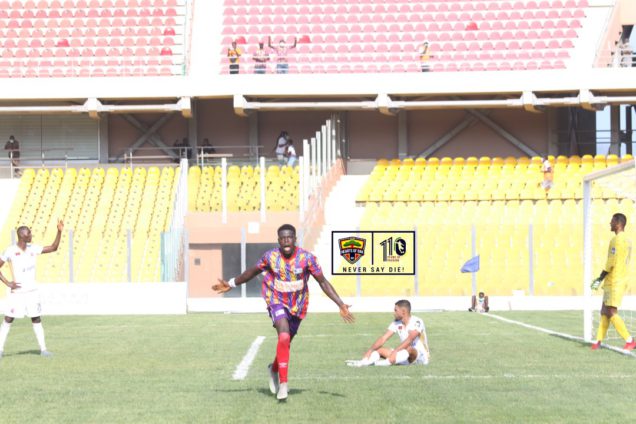 A predatory finish by Hearts of Oak forward Isaac Mensah gave the Phobians a narrow 1-0 victory over Wydad AC in the first leg of the CAF Champions League preliminary round on Sunday.

With 2,000 fans allowed into the Accra Sports stadium, Hearts were expected to start on a strong note. However, it was their Moroccan counterparts who came out of the blocks charging.

Wydad forced Richard Atta into three saves in the first 10 minutes and came closest with a header coming off the post.

Wydad fail to take advantage of their early pressure as the Ghana Premier League champions gradually grew into the game.

With five minutes to the break, Salifu Ibrahim picked the ball from deep on the left flank and whipped a an in-swinging cross which Mensah redirected on the stretch past the Wydad goalkeeper to give Hearts the lead.

GET IN THERE ISAAC MENSAH 👊🏿 pic.twitter.com/P7CJoPdB2U

The Moroccan champions reacted immediately after and missed yet another golden opportunity after breaking the Hearts’ offside trap.

Samuel Boadu’s men came for the second half a much improved outfit and controlled the game for the most part.

Ibrahim had the best chance of the half when the ball was laid on a plate by Kofi Kordzi, but the midfielder’s effort from the edge of the box flew over.

Wydad thought they had their much wanted equaliser in the dying embers of the game. However, the goal was ruled off for offside, to the pleasure of the 2,000 Hearts fans in the stadium.

Hearts take a one goal lead to the second leg in Morocco next week and are on the brink of making history.

Hearts of Oak are on the verge of reaching the group stages of the CAF Champions League for the first time in 15 years.

The last time they reached the money zone, they finished bottom of the group with just two points from six games.

Having gone past the first round in the preliminary round after beating Club Industriel de Kamsar, Hearts are confident of going all the way.

A first leg win at home with a clean sheet gives Hearts of Oak a good foundation to fight for a result away.

With away goals being a tiebreaker, the Phobians have the advantage having the opportunity to play in Morocco next.

Boadu after the game said his outfit are confident and will travel for the result.

“The fans shouldn’t give up, because that’s out motto. We are going to Morocco to qualify.”

If Boadu can lead Hearts of Oak back to the money zone after less than a year in charge, it will be a remarkable achievement.

With the game evenly poised, there is all to play for in Morocco when these two teams clash in five days.

In the two preliminary games so far, Hearts of Oak have started the game slowly. On both ocassions, the Accra-based side have been left off the hook.

If the Phobians are to stand a chance of securing qualification, they will have to be sharp from the start because Wydad will be aggressive knowing they need a goal.

In the early exchanges of the 1st leg, Wydad moved the ball quicker and bombarded the Hearts of Oak penalty box with crosses.

They played five shots in the first 10 minutes with one of them hitting the post. It could have been a different story if not for the heroics of Atta.

That’s an aspect of their game Boadu will like to work. In the two games, Hearts looked overwhelmed by the occasion. The worry for Hearts will be the fact that the team showed nerves at home.

Against Kamsar, Hearts needed the half time break to come alive. At hone to Wydad, the continental masters needed a water break in the first half to start playing well.

With the team yet to travel outside Ghana for competitive assignment, the trip to Morocco could be the real test.

Statistically, Hearts started league games slower scoring 8 of their 45 goals in the last 10 minutes of games.

Boadu will have to inspire his boys to improve their start next week in their bid to return to the CAF Champions League group stages.