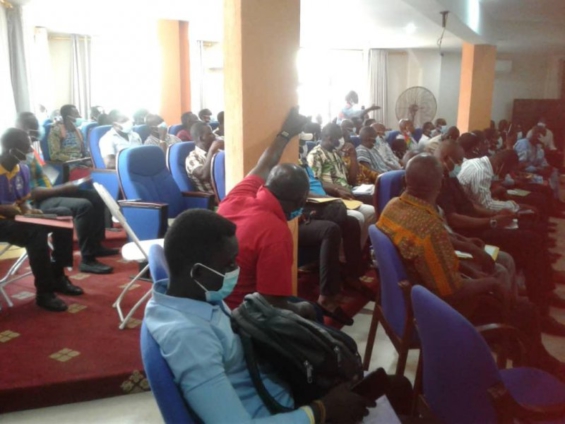 The Ancient City of Cape Coast is set to undergo a massive transformation under a $10 billion project to befit its status as the tourism heartbeat and the citadel of education in Ghana.

Dubbed the ‘Cape Coast Green City,’ the project, birthed by Mamdev Ghana Limited, a construction firm and the lead consultant and facilitator, is a partnership between several local and foreign partners and investors.

The partners would use their capacities to ensure sustainable, diverse, integrated and strong development for the Region.

The foreign partners include Steady X and Hitachi Technologies, an information technology firm, with support from the Chiefs and people of Cape Coast and the Government of Ghana as well as the Diaspora.

Addressing Assembly Members of the Cape Coast Metropolitan Assembly and other stakeholders to solicit their support for the project’s successful implementation, Mr Joseph Kojo Mamphey, Chief Executive Officer of Mamdev Ghana Limited, said aside from tourism and education, the health sector would also receive immense support under the project.

Present at the meeting were members of the Cape Coast Youth Development and the Member of Parliament for Cape Coast North, Dr Kwamina Minta Nyarko.

On tourism, the project will help transform Cape Coast and Elmina into internationally competitive tourism destinations, using the vehicle of eco-tourism to leverage the monumental historical and cultural heritage of Oguaa and the Central Region at large to develop the industry.

An airport will be built together with the construction of first-class roads, among many other modern facilities to make Oguaa, the first administrative capital of the then Gold Coast, a model city.

The Cape Coast Fosu Lagoon and the Kakum River basin (Brimsu), which had been a source of worry to the Metropolitan Assembly and residents concerning their dredging, will be taken care of by the project and the area developed into a world-class tourism centre to generate income.

All forts and castles will be renovated and more Arts and crafts villages created to meet demands while the Kasoa-Cape Coast road network will be reconstructed into a three-lane route to ease traffic congestion and facilitate smooth travelling.

Mr Mamphey underscored the need for Medical tourism and touted plans to rehabilitate existing health facilities, particularly the Cape Coast Teaching Hospital (CCTH) and the Winneba Trauma Hospital while other current hospitals will be upgraded into specialist centres.

Also, a new Hospital with staff accommodation attached will be constructed and other satellite clinics upgraded to cater for the health needs of tourists.

On sanitation, smart containers, waste management models and water systems into integrated systems and good fleet management will be put in place to keep the Green City environmentally friendly.

Enumerating the support for the Education sector, he hinted that an estimated 40,000 laptops will be distributed to all Senior High School students in the Area while school infrastructure will also be given a boost.

Higher institutions will further have modern research centres to aid extensive research on a wide range of issues for growth and development, he indicated.

Mr Mamphey called on the Assembly Members and the people of the area to cooperate with the Project managers to help transform Cape Coast and its adjoining cities into a model smart city to befit its status as a citadel of education and a tourism hub.

Later in an interview with the GNA, Mr Stephen Doffoe Forson, Assembly Member for Kru-Town Electoral Area, expressed delight about the project, stating that Cape Coast would soon be reinstated into its former glory as of the first Capital of the Country.

He rallied the support of all stakeholders for the realisation of the project, which will create jobs for the youth.