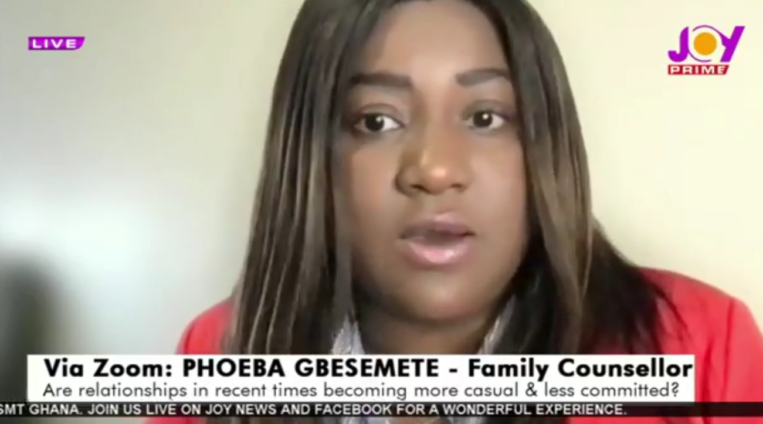 Family counselor, Phoebe Gbesemete has admonished women not to tolerate unfaithfulness from their partners.

Addressing a viewer’s question on how to deal with a cheating partner in a relationship on Prime Morning, she indicated that some men take advantage of women who forgive their unfaithful behaviour, thus consistently repeat it.

“If you were looking for a monogamous relationship, in no way, shape, or form should you entertain him being unfaithful to you. If he’s done it once and he’s confessed it to you, he will do it again, especially if you keep accepting it, because it shows that you don’t have a problem with it, and this is one of the terms that you want to include in your relationship,” she explained on Thursday, December 1.

As suggested on the show, another viewer complained about having bad experiences with a particular tribe of men that she has dated for the past years. For this reason, she is scared to lose her current relationship because the man is from the same tribe.

Speaking to the issue, the counselor concurred that cultural and religious factors play a major role in relationships, admitting that they cannot be discarded.

“Culture and religious factors also play into relationships, and I don’t think we can cast that aside. With the lady that mentioned that she experienced something from a type of man from a particular tribe, I actually want her to really sit down and write down what she had experienced,” she said.

This, according to Mrs. Gbesemete, will help examine and figure out the expectations and the preferred man to be with.

She entreated them to examine themselves and express their expectations in the relationship, as it is necessary in every union, and enable them to choose their partners.

The counselor also believes technology is a major contributing factor to the majority of failed relationships, saying people are mostly deceived by false content on social media. She thinks everything on social media is glamourised so people do not see the ugly side of situations.

She further noted that using a relationship to fix oneself is very risky, saying “it’s unfair.”

The counselor also urged parents to teach their offspring how to handle relationships while growing up to help them understand the structure of successful marriages.

Mrs. Gbesemete also encouraged partners to go through the stages of a relationship to ensure that they are ready for a partner.

DISCLAIMER: The Views, Comments, Opinions, Contributions and Statements made by Readers and Contributors on this platform do not necessarily represent the views or policy of Multimedia Group Limited.
Tags:
Joy Prime
Phoebe Gbesemete
Prime Morning