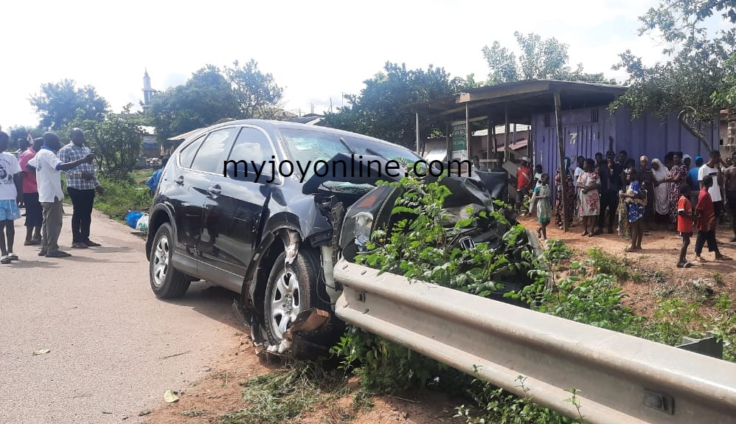 A sister of victims of last Sunday’s accident in which three people were crushed to death at Ejisu-Besease wants the accused driver freed.

Rabiatu Mohammed who collapsed upon hearing news of her brothers’ death says the incident should not be blamed on anyone.

She says the incident, though tragic, could not have occurred without God’s approval.

Two brothers and their brother-in-law lost their lives Sunday morning when a Honda CR-V car ran into them whilst they stood on the shoulders of the road.

Hamidu Mohammed, Abdul Rahman Mohammed and Masawudu Nalko have since been buried.

Though a sister of the victims, Rabiatu Mohammed, appreciates the swift response of the Police, she wants the suspect freed.

“We are happy with how Police have handled the matter but left to me alone, the driver should be freed whilst we give everything to God,” she told JoyNews.

According to her, no amount of punishment meted out to the driver can bring her dead brothers back to life.

“Whether the driver is arrested or not, that will not bring back my dead brothers to life.”

“It was an accident; it was not his intention to run over them with the plan to kill them. In the end, we should forgive him, because the accident happened because God allowed it.” She added.

But another relative, Basiru Mohammed, disagrees.

He wants the driver punished to compensate the family for the loss.

“I can’t just say the driver should go scot-free because his actions have cost us a lot.” he said.

He continued, “My eldest brother and my younger brother are all dead. As if that is not enough, my brother-in-law, my wife’s brother is also dead. We cannot afford to let him go free of charge. I am happy he has been remanded.”

Meanwhile, Adjoyi, the accused driver is to reappear in court on June 7, 2022.