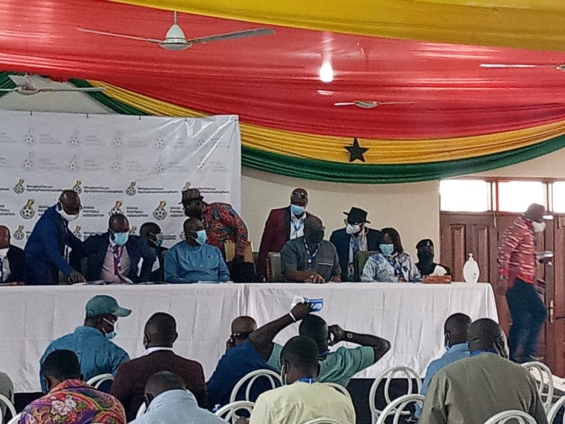 The Ghana Football Association(GFA), has suspended its planned Super League competition indefinitely following a meeting with Division One League Clubs on Friday, JoySports can report.

A committee will be set up to review the current structure of the Super League within 14 days, sources said.

The Super League to be competed for by 18 clubs was scheduled to commence effective 2022/23 football season. GFA General Secretary, Prosper Harrison Addo told JoySports in November the competition was to be managed by the association as the premier league would be managed by a different company.

The structure is such that, three relegated clubs in the ongoing Ghana premier league would join the top five teams in each of the three zones in the current division one league structure to form the Super League, while the remaining clubs would drop to a regional championship.

Each regional championship will be made up of 16 clubs.

This structure has been rejected by the clubs who say they are been demoted to division two leading to a meeting at the FA secretariat at the invitation of the football association.

It has been resolved that, the competition is halted until further notice.

There were concerns that the competition was approved by Congress and it’s the only body with the power to suspend it, but the FA explained that it is not an approved competition by the legislative body and can be suspended.

JoySports understands the football governing body has also cancelled officiating fees for the ongoing season which were to be paid by the clubs. Each club in the country’s was asked by the GFA during a video call to pay GHC 20,000 as officiating. The clubs rejected it saying it has not been budgeted for the season.

The FA has offered to take care of cost refereeing and also offered to pay each club GHC 5,000 from the juvenile football sponsorship money from KGL.

It means, about $40,000 will be diverted to the Division One League.

Sources tell JoySports that each club has been promised replicas of Black Stars jerseys, too.

The planned Extraordinary Congress slated for December 21, at the Baba Yara stadium was mentioned during the meeting, with the GFA leadership requesting two weeks to conclude consultations with the world football governing body, FIFA on the suggested articles in the statutes to be amended.

We understand some letters were read to members present to educate on the regulations and FIFA’s roles in the review of statutes of member associations.

It is unclear why the Extraordinary Congress came up for discussion as the letter from the FA inviting the 48 division one league clubs said the meeting was to discuss the new football pyramid and how it will be funded.

But it appears the leadership of the football association made concessions in their bid to have some members review their intent for the congress.

JoySports has picked intel that some members have developed cold feet towards the congress next week, but efforts are being made to have every member grace the assembly as Friday’s meeting was not meant to resolve some matters that require legal backing from Congress.

Conveners of the resolution of the extraordinary congress will meet to decide the next plan as they seek to review parts of the statutes put together by the now-defunct Normalisation Committee.

Some say next week’s Tuesday’s extraordinary congress cannot be halted as it will affect the football structure envisioned.

DISCLAIMER: The Views, Comments, Opinions, Contributions and Statements made by Readers and Contributors on this platform do not necessarily represent the views or policy of Multimedia Group Limited.
Tags:
Division One League
GFA
Super League