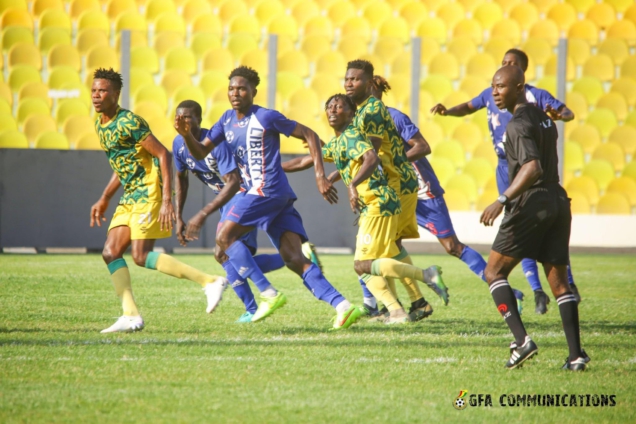 Liberty Professionals recorded a 3-1 victory over Ebusua Dwarfs in the promotion playoff game to take a big step ahead of a possible return to the Ghana Premier League.

The game, which was played at the Accra Sports Stadium on Thursday, August 4, was the first of three games to be played as the Ghana Football Association seeks a replacement for AshantiGold, who have been demoted to Division Two.

The demotion comes following the Miners’ involvement in a match-fixing together with Inter Allies, who also share the same faith.

Dwarfs opened the scoring in the sixth minute through Richard Addai but their lead only lasted three minutes Blaise Macadjei got the Scientific Soccer lads levelled.

With just seven minutes until the end of the first half, William Oduro scored to give Liberty the lead.

The recess saw the Dansoman-based side continue to press Dwarfs before they were finally awarded a penalty.

Oduro stepped up once again to convert and grab a brace on the day as his side walked away with the victory.

The win over Dwarfs means Liberty will play in the 2022/23 Premier League season should they beat Tamale City in their second game.