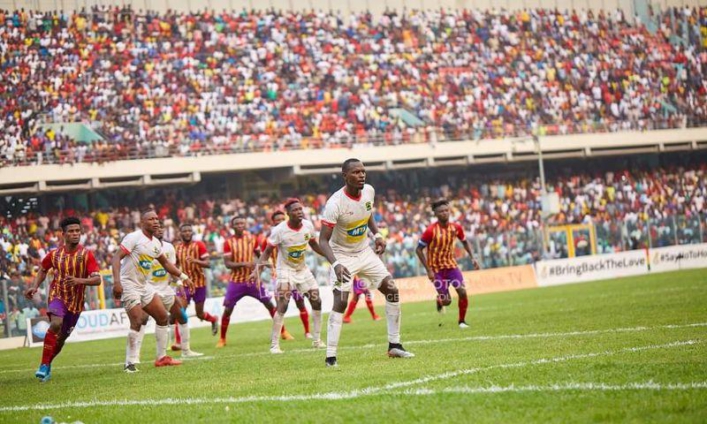 After plenty of scratches, bumps and bruises both on and off the field and with four matches to end the season, Hearts of Oak can open a three-point gap at the summit of the table and possibly go on to win their first league title in over a decade if they beat Asante Kotoko this weekend.

Their form might spuriously suggest their season has been smooth sailing but in truth, there has been so many disruptions which had the capacity to ruin their campaign. However, a swift and apt decision by the club’s board, the Phobians can end the season smiling and celebrating in delirium once they go past their adversary, Kotoko and the other three matches remaining.

The decision by the Ghana Football Association (GFA) to postpone their first game of the season against Aduana Stars due to covid-19 issues really threw their plans out the window. They had to wait for clearance from the FA and the National Covid-19 Taskforce to proceed with the tight encounter against AshantiGold which ended 2-2 under the tutelage of Edward Nii Odoom at the Accra Sports Stadium.

The team had a dry run in three games, a statistic that led to the demotion of Odoom and the arrival of Serbain tactician Kosta Papic, a man who left them on the cusp of their last league trophy in 2009.

The atmosphere surrounding Papic’s arrival served renewed energy, and he would start of on terrific note, thumping Dreams FC 3-0 in this first match on the touchline, a result that earned him commendations not only from the Phobia fraternity but the entire football industry. He would follow that with memorable wins over Bechem United and King Faisal.

However, his stay ended anticlimactically – a string of poor results and performances earned him condemnations and eventually led to his departure. He was accused of favouritism by a section of the playing body. Shortly after his resignation, off the field issues heated up. Staunch Hearts fans passionately stormed the club’s Secretariat and locked up the place, venting their frustration at the board for alleged interference in selection and called on the board to resolve issues ‘immediately’.

Shortly afterwards, the board organized a press conference to calm nerves and address the media on the escalating problem. At that juncture, the spirit in the camp of the team was low and their title chances was all but fizzling out.

U-15 coach Samuel Nii Noi stepped in temporarily before the Board Chairman of the club, Toge Afede XIV grabbed the situation by the scruff of the neck and signed then Eleven Wonders talisman Ibrahim Salifu coupled with the appointment of head coach Samuel Boadu to steady the ship.

Boadu had a so-so start, leading to some reservations from supporters. He called for calm, and that calm has found its way into the fibre of aficionados effortlessly with a league title almost in sight, albeit 12 points more to fight for.

It is fair to say he has turned the fortunes of the club around this campaign. Hearts play with a newfound panache. Some of their score lines scarcely reflected their superiority in matches. Had they been utterly clinical in front of goal, they could have blown away teams and attained cricket outcomes, notably the 1-1 draw with Great Olympics and the 4-1 win over Windy professionals in the FA cup.

These flaws, however, does not eclipse the fact that they are unbeaten in eight matches in the league with seven triumphs.

They walk on to the pitch on Sunday with numbers that have got the Phobia community believing this could the year they end the 11 years of failure to annex the league title. The opponent before them, is Asante Kotoko, an enemy who has has lost just a game in Accra since 2014. That defeat the Porcupines suffered was in 2017 under some controversial circumstances as matchday referee, Samuel Sucker, many say, awarded a dubious penalty. Tiger Eye PI would later, in their number 12 documentary reveal they induced him to manipulate the outcome of the game.

Since then, Hearts have returned to default settings, losing a Normalisation Committee Cup semifinal on penalties before suffering a 2-1 loss a year later.

The most recent league fixture between the two clubs ended in a goalless draw with both teams missing penalties. These two teams were still finding their feet, but as it stands now, they have attained a foothold in the league and are by far the two favourites to win it than any other side.

Hearts are brimming with confidence heading into the match and extremely optimistic of a win on Sunday that would spur them on to clinch the league title for the first time in 11 years. This might not be a destiny-defining match, but it serves a dish that has a potential of being good enough for a party.