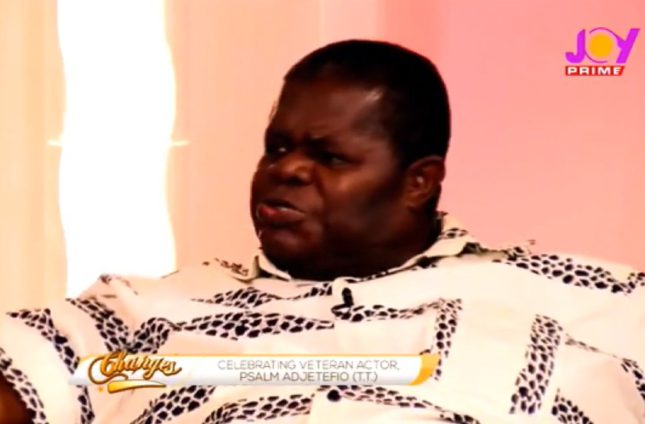 According to him, their marriage was not a pleasant one. ‘T.T.’ explained that he developed heart problems because he was constantly angry with his ex-wife.

Speaking on Joy Prime’s ‘Changes‘ on Wednesday, the veteran actor said, “it got to a point my life was at stake, she was a real pain in the neck. My first marriage is why I started having heart problems. I was always angry.”

“I would return from work and what you would come and see in the house, definitely you would be angry. It got to a point all the women in the house were surprised by her behaviour and some of them questioned her motives. I regret marrying her,” he added.

Opening up on some of the challenges he encountered while married to his first wife, the actor said there were ocassions when he returned from filming sessions late in the night. Instead of his ex-wife opening the door to the room and welcoming him lovingly, she would ignore him. Not even hard knocks on the door would make her budge.

‘T.T’ said one revelation that shocked him was when he found out, during his first visit to her home, that his former wife’s father was a priest, yet had erected a shrine in their living room.

Acting, he said, was his time to escape from the troubles of his marriage.

“When you went on location (to film) you got happy and forgot about those problems. But most of the time I came home and what I saw, I won’t like it,” he added.

The actor urged young men and women to be cautious when choosing a significant other. He stated that his lack of detail in terms of researching the background of his ex-wife cost him a lot.

“Young people who are envisaging marriage, please before you attempt getting close to any woman or man, find out their background, where they come from, this I didn’t know,” he said.