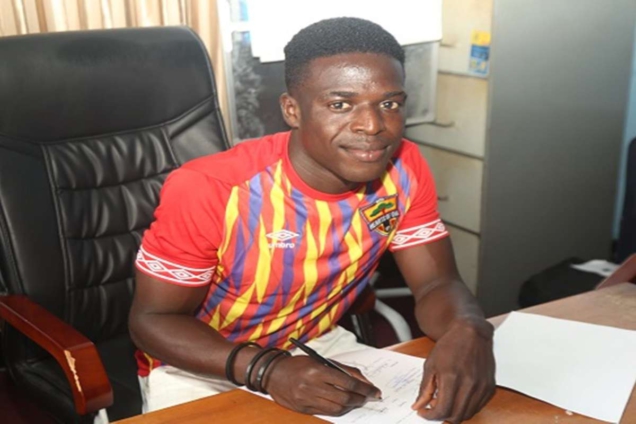 Gone are the days when Hearts of Oak specialized in chasing big name signings, and haggling with rivals over popular names.

This week, Isaac Mensah was announced as the club’s newest acquisition, signing a three-year contract with the Phobians. Watchers say he is expected to do one thing, and one thing only – to score goals.

Isaac is the first signing the club has made since Nuru Sulley in May. “If you look at his age, it fits into our team strategy of getting players for the future as we build,” Hearts spokesman Opare Addo tells Joy Sports.

Mensah was snapped by the club masters from lower tier side Nkoranza Warriors. Joy Sports understands that scouts had watched him for a while, and suggested him to coach Edward Odoom.

“The coach did not need to be convinced twice when he saw the player,” a technical team member tells Joy Sports.

It was now a question of how fast the capital club could move to beat overtures from known talent-developers WAFA and Liberty Professionals. The Dansoman side would have signed him much earlier had it not been for an injury Mensah sustained, forced the Dansoman based club to hold back on making an offer. It a decision Liberty now regret.

Why Hearts need him

He is a natural finisher with a knack for placing himself in the right areas of the box. Mensah also possesses the pace and strength to take on opponents down the flanks and supply team mates.

“A lot of people say Isaac is a pure goalscorer, but actually there is more to his game,” the technical team member tells Joy Sports. “He also has creative abilities. But he has been brought to help us with goals”.

In that sense, Mensah’s only obvious competition comes in the rather experienced Abednego Tetteh.

What is not in doubt is that Hearts need him. The biggest pointer is the shift in initial plan to sign him and loan him out. Again, Hearts have a mix of players who have failed to live up to expectation and others whose contracts have run out and are unwilling to sign new deals. These players are either asking for more money – money Hearts are unwilling or simply unable pay – or are just looking elsewhere.

Sources tell us Joseph Esso is as good as gone. The story is that he used a purported interest from Sudanese side Al Hilal to hold out for an improved offer. Hearts refused to give in.

Even though both player and club have since lost out on the Al Hilal deal, it is unlikely the two parties will reach an agreement given the player’s demands. Other departures in Bernard Arthur and Malian Abubakar Traore (whose contract has run out and won’t be renewed) have left the club a bit light on attacking options. Benjamin Eshun remains with the club.

Mensah tells Hearts Media: “I am very happy to have signed for a huge club like Hearts of Oak and I cannot wait to get started with my new teammates.”

How he fits in

Despite his exploits for Nkoranza Warriors in the previous season (which was cut short due to the coronavirus pandemic), he scored eight times, half of that in a single game against Gbewaa FC. Mensah will still have to earn his place in the Hearts eleven. Getting ahead of Tetteh will undoubtedly be herculean, but his advantage over Kofi Kordzi is obvious – he’s a better finisher inside the box and Hearts need that.

Isaac’s likely to partner either Tetteh or Kordzi at any given point. He offers a threat in the box the Phobians haven’t had in a while.

A Mensah-Tetteh partnership looks classy, at least on paper, due to the attributes they both possess. Tetteh will provide the aerial threat and strength to hold up the ball, and will find in Mensah, an attacking partner to play with and create chances for each other. Opposition defenses will have a hard time with two mobile attackers and if they gel to the point of switching positions during games, the unpredictability will create an extra tactical problem for opposition coaches.

Kordzi scored six goals last season, three of those outside the box. Mensah is likely to score more. If the former Nkoranza Warriors man is able to rack up 12 goals, a number he seems very capable of, it should be considered a good debut season. Throw in Tetteh’s number and Hearts should take a step upwards from their previous season’s performance.

It is common to see players kiss the badge after signing but only a few really mean it. Mensah’s first word after signing sound refreshing and there seems to be an element of honesty about it too.

His former employers say he’s a player whose commitment to the cause cannot be questioned. Such was his determination to get Nkoranza Warriors to the Premier League that the club were reluctant to sell. In the end, a hard decision had to be made because of the difficult financial times.

Hearts is many steps above Nkoranza Warriors but Mensah’s determination is unshaken. “It is every young players’ dream to play for a big club at the highest level and I want to help the club win trophies and leave a good imprint at the club.”

“I want to make the fans happy with good performances and, I will work hard to repose the trust imposed in me by the team.”

The new Ghana Premier League season is slated to begin in October. We’ll soon see how Isaac fares in the big time.