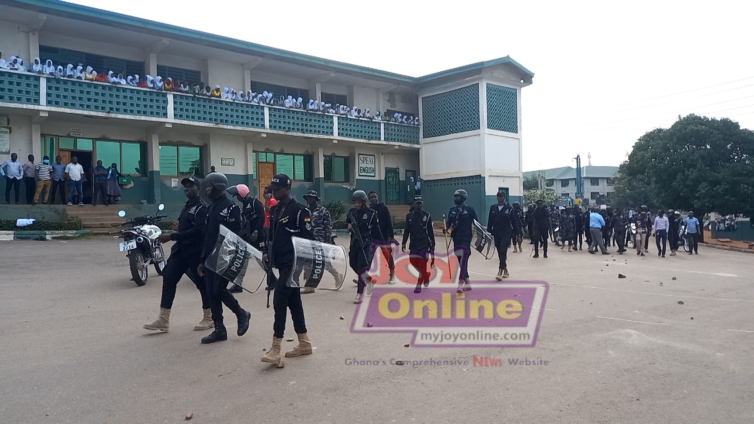 It has emerged that students of the Islamic Senior High School were chased into their dormitories and classrooms by armed police who fired live ammunition and tear gas.

President of the Ghana Muslim Mission, Sheikh Dr. Amin Bonsu also revealed that at least five teachers who intervened were arrested during the police invasion of the campus.

“For you to enter angrily; shooting fire and chasing the students to even their dormitories and so forth is highly unprofessional,” he said.

According to him, some police officers tried to forcibly enter the school premises by scaling the main gate of the school without recourse to the presence of school authorities.

“Do you have to climb the gate? Do you have to push the gate by force to come in? Go to the authority and see how the situation is.

“Teachers who went to intervene and so forth, some of them you even  arrested them and sent them to police station. Can you imagine?”

Dr. Amin, however, wants the IGP to extend investigations into how some students were assaulted without any provocation on campus in the presence of their teachers.

Whilst welcoming investigations by the IGP into the conduct of the police, Dr. Amin Bonsu commended Dr. George Akuffo Dampare for showing leadership by  sponsoring the provision of anchor rope as an interim speed rump.

Meanwhile, academic work has resumed at the Islamic Senior High School as students prepare to write their end of term examinations.

DISCLAIMER: The Views, Comments, Opinions, Contributions and Statements made by Readers and Contributors on this platform do not necessarily represent the views or policy of Multimedia Group Limited.
Tags:
Islamic SHS
Police
Police-student-clash