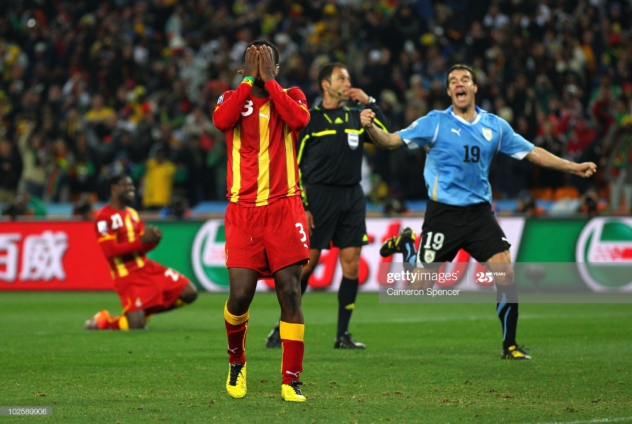 JOHANNESBURG, SOUTH AFRICA - JULY 02: Asamoah Gyan of Ghana reacts as he misses a late penalty kick in extra time to win the match during the 2010 FIFA World Cup South Africa Quarter Final match between Uruguay and Ghana at the Soccer City stadium on July 2, 2010 in Johannesburg, South Africa. (Photo by Cameron Spencer/Getty Images)

Ghana international, Asamoah Gyan, says it’s only normal that Ghanaians would want revenge against Uruguay following the draw for the 2022 World Cup.

The Black Stars were drawn in Group H, where they will play Portugal, South Korea and Uruguay in the group stage.

For Gyan and the majority of Ghanaians, the game against the Sky Blue presents an opportunity for the country to have one over Uruguay following the heartbreak at the 2010 World Cup.

Uruguay were in the way of the Black Stars and ended their hopes of making it to the semi-finals, as they beat Ghana on penalties.

In an interview with the BBC’s John Bennett, Gyan said facing them again will be an opportunity to prove himself while adding that Ghanaians are only right to call for revenge.

“Ghanaians want revenge [against Uruguay]. It’s the Ghanaian motivation. I’ve been in the game for a long time. People outside know what happened. The whole world knows what happened. When the draw was made and they saw Uruguay were in Ghana’s group, the only thing that came in mind was revenge. It’s a normal thing,” he said.

“Ghanaians want revenge. Personally, I just sat back and I just smiled because I understand how the game goes. Things happen. What happened in 2010 is behind me but maybe there might be another opportunity. When the time comes and I’m part of the team and we play against Uruguay, you might never know what is going to happen.

” We just have to be ourselves. Obviously, I’m human. I have in the back of my mind that maybe if I get another chance, I can be able to prove myself,” he added.