Lesotho: Why a dispute over mohair led to a parliamentary fist-fight

A sitting of Lesotho’s upper house of parliament this week degenerated into a fist-fight between massed ranks of rival MPs who also threw wooden panels, documents and anything else they could get their hands on across the chamber at each other.

The scuffle happened during a debate over a long-running dispute over new regulations around the wool and mohair trade – not the subject you might expect to ignite such strong passions.

First off, what is mohair?

Mohair is made from the hair of Angora goats. It is much softer than wool and has a noticeable sheen and lustre.

Because it is considered to be a luxury textile, garments made entirely from mohair are more expensive than those made from other types of yarn.

Some call it the “diamond fibre”.

But why fight over it?

Mohair and wool production is one of Lesotho’s main industries and is the main source of income for many families.

Earlier this year, thousands of farmers marched to parliament to protest against a regulation signed in 2018 forcing them to sell their wool and mohair to a Chinese broker.

The farmers said that the new broker was not paying them for their goods.

This led to a crisis that left an estimated 48,000 farmers without earnings for more than a year, according to South Africa’s BusinessLive newspaper.

After numerous protests in the months after that, the government, led by Prime Miniser Tom Thabane, changed its tune and ended the controversial deal with Guohui Shi and his company, Lesotho Wool Centre.

So the farmers should be happy?

While the deal with the Chinese businessman is no longer in place, what has remained is a decision for mohair and wool to be auctioned from Lesotho instead of neighbouring South Africa which had been the practice for many years. 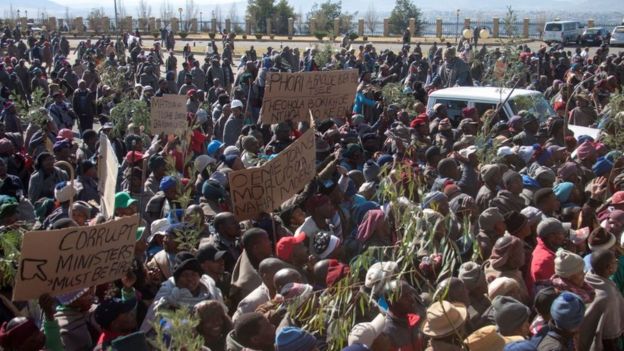 Image captionAngry farmers took to the streets of the capital, Maseru, in June

Lesotho’s farmers say the government’s refusal to allow producers to sell their products in South Africa and elsewhere means they cannot get fair market prices.

They used to rely on a South African broker, BKB, to export their products seemingly without any problems. They now want to either return to that arrangement or be allowed to sell to alternative markets.

In October, lawmakers called for the regulations to be repealed but a new deal is yet to be finalised.

Why do they want to sell their mohair in South Africa?

Lesotho is a small landlocked country, with a population of just two million, and the partnership with South Africa gave producers access to a broader market, they say.

It is one of southern Africa’s poorest nations, with unemployment rates of 24-28%, according to the World Bank.

Neighbouring South Africa produces 53% of the world’s mohair and runs the world’s biggest auction in the coastal town of Port Elizabeth in the Eastern Cape province. 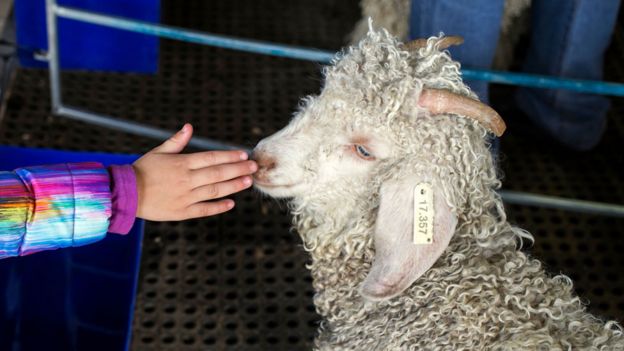 Farmers back in Lesotho, and opposition MPs, are worried that if they continue to only sell their produce from their own country, buyers might move elsewhere because of the increased travel costs involved.

While there are other tensions between the government and opposition, this week’s sitting was expected to start addressing the concerns raised over existing regulations.

Opposition leaders grew frustrated when they learned Minister for Small Business Development, Conservation and Marketing Chalane Phoro would not be appearing in parliament, as they had expected, to explain what was happening with the regulations.

Then the speaker of parliament suspended the session, sparking uproar. 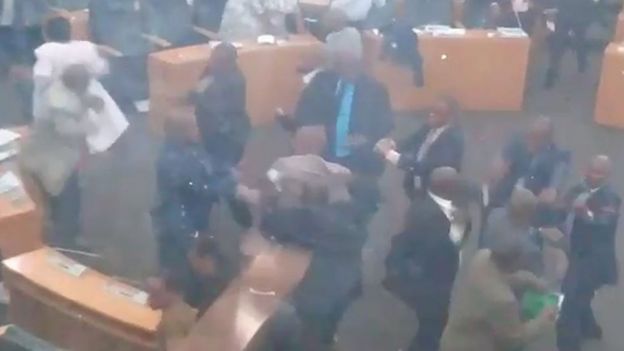 So what happens now?

That is not entirely clear.

There is still a dispute of over the mohair regulations and, once the dust has settled, this will need to be resolved by the very people who came to blows.

In the meantime, the many hundreds of families in Lesotho who depend on mohair for their living will be hoping those in leadership positions can put their fists away long enough to come to a decision.