Makeshift Barca side beaten at Celta and lose Dembele to injury 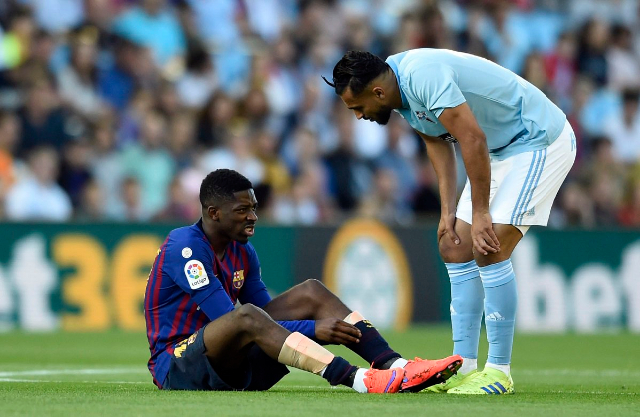 Barcelona fell to their first La Liga defeat since November as the champions were beaten 2-0 at struggling Celta Vigo after making 11 changes but forward Ousmane Dembele suffered an injury setback ahead of Tuesday’s Champions League game at Liverpool.

Dembele, who came off the bench in Barca’s 3-0 win over Liverpool in last week’s semi-final first leg, was one of few regular starters to face Celta as coach Ernesto Valverde made sweeping changes after clinching the title last Saturday.

The win took Celta on to 40 points and a step closer towards guaranteeing survival but it meant 19th-placed Rayo Vallecano became the first team to be relegated, after a 4-1 thrashing at the hands of Levante left them on 31 points from 36 games.

Uruguay forward Maxi Gomez gave Celta a deserved lead in the 67th minute, sliding to the floor to divert a low pass beyond Barca’s reserve goalkeeper Jasper Cillessen, after the home side saw a goal ruled out for a marginal offside after a VAR review.

Celta’s captain and talisman Iago Aspas then sealed the away side’s win by converting from the penalty spot after another VAR review ruled that Barca’s Samuel Umtiti had handled the ball.

Barca, who lost for the first time since a 4-3 defeat to Real Betis nearly six months ago, have 83 points while second-placed Atletico have 74 after losing 3-0 at Espanyol earlier on Saturday.