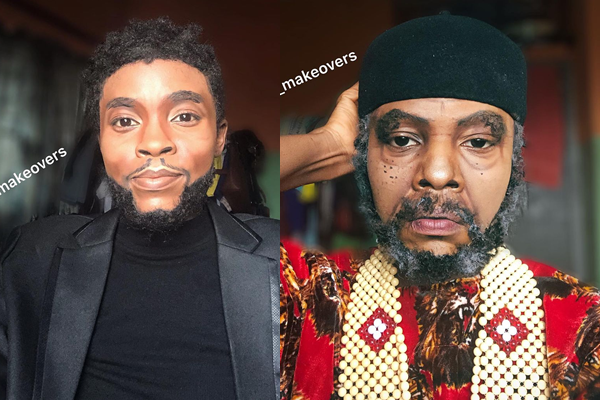 A makeup artist from Nigeria has extended her skills from makeup to transformation.

In several videos that have gone viral, the young lady called Jane Richard used makeup to transform herself into some of the most famous people.

Some of these persons include the late Chadwick Boseman, Tiwa Savage, Davido, President Buhari, Ramsay Noah, Kanayo O Kanayo among others.

In an interview with BBC Pidgin Miss Richard explained that during the lockdown, she was bored and wanted to try new things while staying indoors.

She explained that she had tried to learn new skills but somehow turned herself into Buhari.

However, after the positive reactions she got, Miss Richard said she was encouraged to do more.

She revealed that her most challenging transformation has been that of Pete Edochie.

Miss Richards said she had spent about three hours trying to capture the facial hairs and the expression to perfect the face.

Chadwick Boseman was the first international celebrity she tried to transform into, she stated.

According to her, his death was a huge blow to her and her family thus she wanted to do something to remember him by.

Miss Richards said she calls herself an artiste explaining that her craft is needed in many places especially in the movie industry.

DISCLAIMER: The Views, Comments, Opinions, Contributions and Statements made by Readers and Contributors on this platform do not necessarily represent the views or policy of Multimedia Group Limited.
Tags:
Chadwick Boseman
Davido
Jane Richard
Tiwa Savage