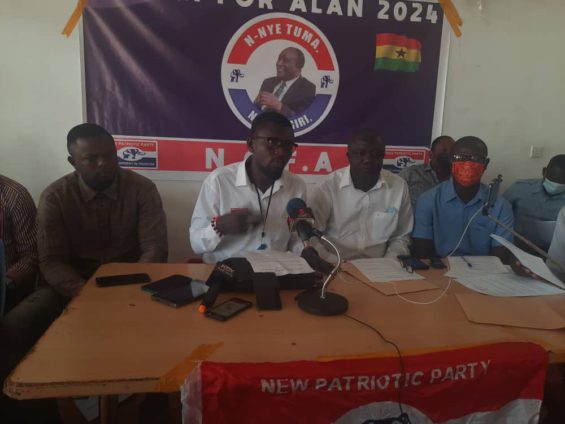 A New Patriotic Party (NPP) youth group in Tamale purported to be supporters of Trade Minister, Alan Kojo Kyeremanteng, are unhappy with what they call “selective application of rules and sanctions” by the leadership of the party.

They said sometime last year, the General Secretary, John Boadu announced rules and regulations to govern the conduct of aspirants for the various executive positions, especially the flagbearership position.

But according to the youth, some high ranking members of the party continue to violate the laid down guideline with impunity without any sanctions from the leadership.

Addressing a press conference in Tamale, Secretary of the Group Sayibu Gafaru accused the Vice President for violating the rules of the party at the last delegates conference in Kumasi.

“He stood in flagrant breach of the aforementioned rules and regulations when he arrived at the conference grounds with supporters wearing his branded T-shirts and banners announcing his campaign for the flagbearership,” he said.

He added that some MPs and regional executives have also openly declared their support for Dr. Mahamudu Bawumia which clearly is in violation of the party’s rules.

“Notable among these officials are Deputy General Secretary of the Party, Obiri Boahen, the Northern Regional Executives led by Chairman Samba, the First Vice Regional Chairman of Ashanti, Kwabena Nsekyire, the Member of Parliament for Karaga Dr Adam Amin Anta, MP for Tolon, Habib Iddrisu and MP for Yendi, Farouk Aliu Mahama and some others have openly campaign for the Vice President,” he indicated.

Mr Gafaru said if it is okay for others to declare their support for the Vice President why are party members who support Alan Kyeremanteng being treated like criminals who are being chased out of the party.

“If some party members have the right to declare their support for the Vice President and other aspirants, then we also believe that the leadership of Alan John Kyeremanten have an equal right to express our preference without any fear,” the Secretary said.

He said they have petitioned the Regional Council of Elders but they are yet to get any response.

Mr Gafaru said only unity and fairness will guarantee the NPP a chance to ‘break the 8’, not selective application of the rules as is happening now.

He added that the NPP party is a democratic party that believes and upholds alternative views, tolerance and choice base on free will, therefore they will vehemently resist all attempts to suppress, victimize and intimidate patriots who shows support for the Trades Minister.

The Secretary said it is crystal clear the overwhelming masses of the NPP are poised and eagerly ready to give the mandate of this party to Alan Kyeremanten and nothing can stop that.