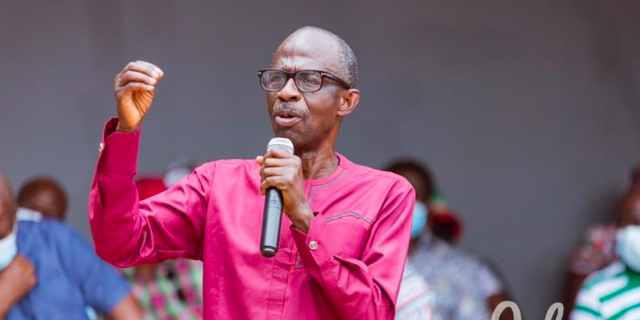 General Secretary of the National Democratic Congress (NDC), Johnson Asiedu Nketia, says the assumption by party members that the NDC would always win political votes in the Volta Region is a problem.

“Our biggest enemy is complacency, where we tend to think that whatever happens, we have won Volta Region. It is our stronghold, so we are going to win.”

He said everyone was disappointed but not surprised that the Party lost the parliamentary seat in the Hohoe Constituency.

Mr Asiedu Nketia while addressing Branch Executives of the Party in Hohoe as part of activities to mark the Party’s 30th Anniversary, said the seat was lost partly through gerrymandering.

He said the carving out of the Guan enclave from the Hohoe Constituency although unlawful, could not be reversed although they fought it.

Mr Asiedu Nketia said there was the need for the Party members to look at the new Hohoe Constituency without the Guan and begin to strategise to win the seat back.

He said the Party had decided to embark on decision-guided research in the Volta Region particularly in the Hohoe Constituency ahead of the 2024 general elections.

Mr. Asiedu Nketia said the NPP government was focused on disrupting the NDC’s power base which was the Volta Region with decisions such as separating the region from the Oti region.

He said the creation of the Oti Region had even gone in favour of the Party by being the only region where all parliamentary seats were won.

Mr Samuel Ofosu-Ampofo, National Chairman of the Party, said it was important to note that if the Hohoe seat was won, the narrative at the national level would have been different.

He said the Party was proud of members in Hohoe who stood their grounds despite all influences and voted for the Party; describing them as the true heroes of the Party.

Mr Ofosu-Ampofo urged leaders of the party to begin assisting individuals without the Ghana Card to register and not wait till the last minute.

He said there was the need to bring together all members, reconcile with each other, and see themselves as one people with a common agenda.

Mr Henry Ametefe, Volta Regional NDC Chairman, said parliamentary democracy required that a member of a party must die for that party.

Madam Della Sowah, Member of Parliament for Kpando Constituency and representing the Volta Caucus MPs, noted that the 2024 elections in the Hohoe Constituency must not be business as usual.

She urged party members to begin the hard work and not wait until it was too late.

Mr George Bright Anni Bansah, Hohoe Constituency Chairman of the Party, urged the national executives to input measures to ensure that the votes of the party in the Constituency will be protected ahead of 2024.

The occasion was also used to sensitise members on the Party’s membership registration processes.