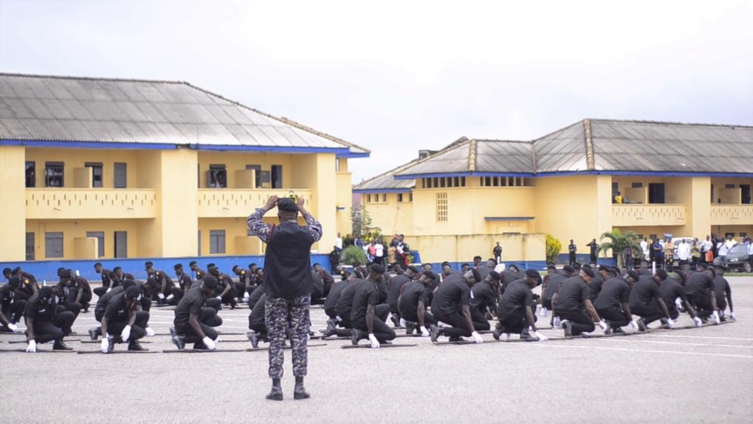 In readiness to combat terrorism, the Ghana Police Service is training new recruits and personnel for high-risk operations.

Known across the world for its peace, Ghana is growing more uneasy as a result of a string of terrorist incidents in nearby countries.

The Police have therefore indicated their readiness to ward off terrorists.

A parade at the Police Training School in Kumasi saw 170 recruits, comprising 144 males and 26 females, passing out as junior rank officers.

They are exiting the training school having been equipped with modern skills in legal procedures, proactive policing strategies and field training such as riding, shooting and swimming.

Director General-ICT at the Ghana Police Service, COP Edward Tabiri, who reviewed the parade, reiterated the readiness of the Service to fight any imminent terrorist attacks.

“Almost all our neighboring countries have experienced some form of terrorist attack. We cannot therefore fold our arms and wait for the worst to happen. It has become imperative to prepare our personnel to adequately respond to any such threat or attack. In view of this, all recruits on parade as part of their basic training were sent to the High-Risk Operation Training School, formerly the counter-terrorism enactment and concentration center at Akanteng in Yilo Krobo municipality of the Eastern region,” he said.

The Police Service is reported to be bedeviled with ill-conduct and crimes that dent the reputation of the internal security force.

He assured of stringent efforts to smoke out miscreants disguised as Police officers to bring sanity and dignity to the profession.

“In dealing with the public, it is expected that the Police officers exhibit a high sense of professionalism, civility and respect for the general public.

This undoubtedly will win their confidence and trust and as a result, they may offer the requisite information and support we need to discharge our mandates effectively,” he added.

Each of the awardees received a plague and a baton of honour in appreciation of their performance.

DISCLAIMER: The Views, Comments, Opinions, Contributions and Statements made by Readers and Contributors on this platform do not necessarily represent the views or policy of Multimedia Group Limited.
Tags:
Police
Terrorism