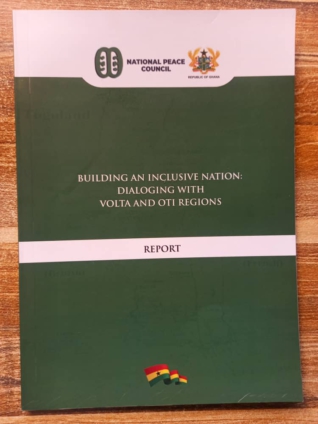 The Chiefs and people of the Volta and Oti Regions are requesting the government to release some 52 youths arrested in connection with violent attacks on some state installations in the Volta Region.

The accused persons who were arrested for their alleged involvement in the attacks reported to be orchestrated by the Western Togoland secessionist group, have been in detention for over 2 years without trial.

The relevant state agencies have, therefore, been advised to prosecute the 52 accused persons or release them from custody, in the absence of any evidence of their involvement in the attacks in September 2020 in Aveyime and Mepe in the North Tongu District.

“We note Ghana’s international reputation and commitment to human rights and call upon the Government of Ghana to immediately release and cause to be counselled all the 52 citizens detained for their alleged roles in the 2020 attack as their continued detention without trial for over two (2) years is a gross violation of their human rights”.

This was one of the 10 recommendations contained in a report compiled by the National Peace Council after a wide consultation in the Volta and Oti Regions concerning alleged ethnic-based discrimination and marginalization of people of Eʋe origin.

The report is christened “Building An Inclusive Nation: Dialogue With Volta and Oti Regions”.

Participants at the consultative forums raised concerns about citizenship discrimination, negative stereotyping, inefficient educational infrastructure, discrimination against Eʋes in employment in the public sector, underdevelopment of the two regions, security, harassment and violence.

According to them, the discrimination and marginalization stem from the erroneous perception that Eʋes are aliens who came from Togo to join Ghana after it gained independence, ignoring the fact that ethnic group which inhabited the Trans-Volta Togoland became part of the then Gold Coast through a plebiscite in 1956, before Ghana’s independence.

As contained in the recommendations, the proponents entreated Ghanaians to identify Eʋes as bonafide Ghanaians and discarded the erroneous perception that Eʋes are aliens in Ghana.

They, therefore, proposed an intense educational campaign led by the National Commission for Civic Education on “hate speech and intemperate language and direct sensitisation on building an inclusive nation”.

They also advocated for the promulgation of a “Fair Appointment and National Cohesion Law” to give effect to Article 35(6) (b) of the 1992 Constitution, to ensure equitable distribution of employment opportunities among the various ethnic groups in the country.

On the underdeveloped state of the two regions, the proponents implored the government to complete the Eastern-Corridor Road and other major road projects, and prioritize the construction of the Keta sea defense wall and the highly anticipated Keta Port.

The recommendations also included a call on the government to complete all educational infrastructure projects in the Volta and Oti Regions, “ensure fair and adequate distribution of teaching and learning materials, ensuring fair distribution of personnel and support this with motivation and incentive packages”.

The proponents want the Government of Ghana to ensure that clean, scientific and environmentally friendly technologies are deployed in the mining of mineral resources in the Volta and Oti Regions and undertake contracts that would be of immense benefit to landowners and communities.

They also requested the Interior Ministry to remove “nuisance-in-land, fear-invoking security and immigration barriers and checkpoints”  in Asikuma, Leklebi, Liati, Sogakope, and Juapong, directing the Ministry to focus on fortifying security and patrols at the country’s borders.

“Suggest an established framework on deployment orientation for security personnel, particularly the military before deploying them to perform police duties in the communities”, the recommendation stated.

They also urged the government to put into effect the proposed establishment of a Military Training School in the Nkonya-Alavanyo area to maintain peace and security in the two communities, while commending the chiefs and people of Alavanyo and Nkonya, the National Peace Council and the relevant state institutions on the relative peace being enjoyed in the area.

Speaking at the forum, the Mifiaga of Anlo and Paramount Chief of Kome/Shime, Torgbui Nyaho Tamakloe VI, entreated the National Security to deal with the issues prescribed in the report.

“This path that has been chosen I believe, will augur well for all of us, but it is not about romance, it is serious business. We don’t give you a report and then you sit on the report and you start dancing kpanlogo around that report. The implementation of every element of the report is important for our people”, Torgbui Nyaho Tamakloe stressed.

The leadership of the Volta Regional House of Chiefs have advocated for a fair treatment and equitable distribution of national resources to ethnic groups in the country since Ghana is a multi-ethnic, multi-lingual, multi religious and multi-culture country.

DISCLAIMER: The Views, Comments, Opinions, Contributions and Statements made by Readers and Contributors on this platform do not necessarily represent the views or policy of Multimedia Group Limited.
Tags:
National Peace Council (NPC)
Oti Region
Volta Region
Western Togoland