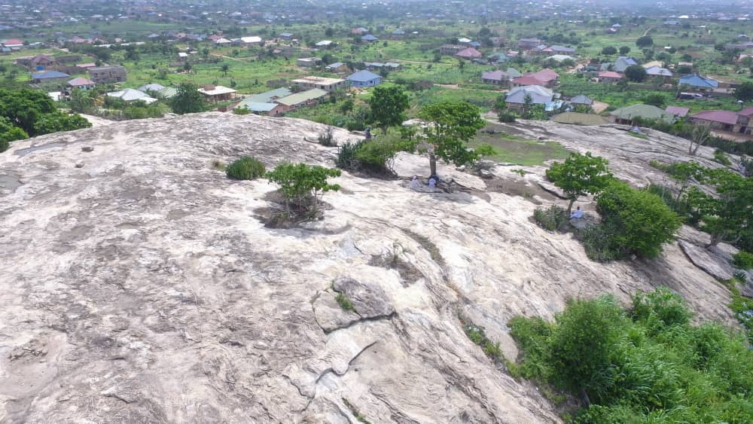 A beautiful rocky mountain of medium height with a flat top, against a blue cloudless sky, has been discovered in Kasoa, in the Central Region of Ghana.

A peri-urban town in the Awutu Senya East Municipality of the Central Region, Kasoa plays host to one of Ghana’s busiest markets.

The town shares boundary with the Greater Accra Region, and is about 45 minutes drive from the capital, Accra.

Kasoa now has an overwhelming population which is made up of foreign nationals from neighboring countries like Liberia and Nigeria. The town boasts of massive housing infrastructure without tourism and recreational facilities.

The medium height rocky mountain, is the latest good news in the town. But the huge economic potential is lost on the residents of the community.

Endowed with an astonishing strong cool wind, white surface, natural markings, small gullies filed with rain water, the natural environment the place provides, is fast attracting tourists and worshipers from far and near than any activity in Kasoa.

The serenity provided by the rocky mountain seems the main attraction for worshipers undergoing long period of fasting.

Water found on the mountain is said to be spiritually potent as people have had wonderful outcomes (signs and wonders) after using it for various purposes.

Thus, some people go and fetch the water in gallons for future use while others use it to wash their faces during prayer sessions.

Evidence of the place being used for worship could be found at a particular location, where pieces of anointing oil bottles and melted candles in different colors, have been gathered.

The presumed Kasoa’s sacred place for worship, records dozens of people who spend couple of days and months praying for God’s intervention in their individual situations.

There are some who have formed permanent groups and members hold midnight prayer sessions on the mountain.

The place has also become a location for musicians, especially Gospel artistes, to record their music videos. When the myjoyonline.com team visited the place, one of the new Gospel artistes, Albert Possible, was seen busily recording his maiden music video.

Mrs Doris Acquah has been praying on the mountain for the past ten years and she believes the place is a holy ground, thus praying there brings positive answers from God.

She said child birth became a problem for her when she lost her child.

She said praying on the mountain has shaped her spiritual life and now she can boast of 5 children in a happy home.

Another worshiper Philip Nartey, who was seen busily praying, said his life has turned around since he started praying on the mountain.

Philip Nartey said he normally prays alone and has witnessed a total transformation in both his physical and spiritual life.

An elder of one of the prayer groups, Odeefuo Oprah Boadi said he was in Tarkwa when he received the call from God to come to the mountain.

According to him, there have been some occasions that he encountered angels on the mountain. For him, that confirms God’s presence there.

Victoria Akyeabea, a new resident living close to the site said, discovering a place like this in her community, is very good news for people in the municipality.

She called on the authorities to develop the place which she believes, “can serve as recreational grounds or event centre because the place is beautiful in nature, so developing it will attract people from afar to do their own thing and I think it can generate income and development for the people.”

“I’m going to benefit more from this because I can go there for relaxation and also invite friends to come around to have good time over there” said Victoria Akyeabea.

Odeefuo Oprah Boadi said God can use the mountain to save Kasoa from its current situation.

On his part a prolific videographer, Michael Addo, who has been visiting various tourism sites producing music clips, advised Ministry of Tourism, Arts and Culture to protect the site before people start encroaching.

According to him, in most cases, development of tourism sites results in elimination of the aesthetic value and natural scenery.

He therefore suggested that the natural ambience of Rock City should be left intact when the site is developed.

In an interview with the Assembly Man for the area, Foster K. Mensah, he said the site has potential of turning the fortunes of Kasoa and its environs around, if the needed attention is given to it.

Mr Foster acknowledged that there has not been any plan to exploit the potentials of the site, adding that he will do everything in his capacity as an Assembly Man to make sure the site is properly developed.

He told myjoyonline.com that he will meet the Chiefs of the area and present a report on the site to Efutu Senya West Municipal Assembly to discuss possible ways of promoting the site to attract more tourists.

He said one of the major problems is the road to the site, which according to him, could be a great obstacle, since poor road network at various tourism sites across the country, has become a major challenge that prevents tourists from patronising these sites.

On the issue of encroachment, the Assembly Man pledged his readiness to collaborate with the Chiefs and residents to fight any potential encroachment on the site.

In an interview with the Chief Executive Officer of the Ghana Tourism Development Authority, Mr Akwasi Agyeman, he said the existence of the site has not come to his attention. However, with the information available to him, officials from his outfit will be made to visit Rock City and submit a report for further action.

He said after the assessment he will meet the key stakeholders such as Chiefs of the land and Awutu Senya East Municipal Assembly to come out with a plan to provide the necessary facilities to meet the needs of visitors.

He disclosed that he has received reports of new tourism sites across the country and the Rocky Mountain in Kasoa will be taken into consideration.

Kasoa is popularly known for its busy market, but in the last few years, there has not been a passing week without the media reporting all manner of atrocities and other social vices from there. These incidents include, armed robbery, murder and fights over land.

The situation has scared away prospective investors and settlers, a situation some residents believe, can be changed by the the adventure tourism site that the Rocky Mountain provides.

Thus, Kasoa can be redeemed from its tainted image.

DISCLAIMER: The Views, Comments, Opinions, Contributions and Statements made by Readers and Contributors on this platform do not necessarily represent the views or policy of Multimedia Group Limited.
Tags:
city
Kasoa
ofaakor
rock