'Step back and take the heat out' - Otumfuo urges as 'Yes', 'No' campaigns rage on - MyJoyOnline.com

‘Step back and take the heat out’ – Otumfuo urges as ‘Yes’, ‘No’ campaigns rage on 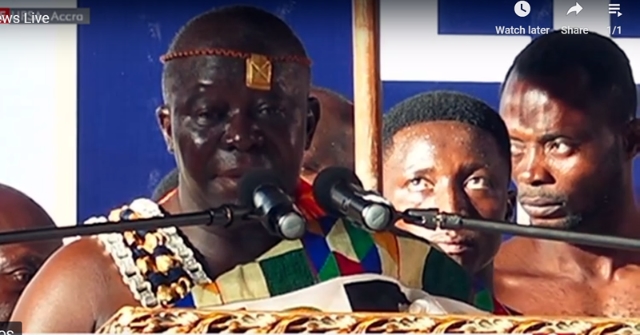 Asantehene, Otumfuo Osei Tutu II, has criticised the neglect of chiefs in ongoing reforms at the local government level.

Speaking at the Annual Leadership Lecture Series organised by the University for Professional Studies, Accra (UPSA) on Friday, the respected king of the Ashanti people said had chiefs been consulted, some chiefs would not have declared that the proposal to elect Metropolitan, Municipal and District Chief Executives (MMDCEs) and political party participation in the same process was incompatible.

“If there had been such engagement, I could not think of how anyone would have ignored the logic in the case for according our chiefs the rightful representation in the new structure. And by the same token, I could not think of how any chief would have seen any incompatibility in the removal of the entrenched clauses in the Constitution to permit the election of the metro and district chief executives or mayors and also allow political parties to sponsor candidates for local elections,” he said.

Deep cracks within the National House of Chiefs over the national referendum on whether or not to allow political parties to sponsor candidates for local level elections emerged following a press statement that sought to suggest that chiefs backed political participation of MMDCEs.

The press statement released on Friday, on the letterhead of the House of Chiefs and under the signatures of the President, Togbe Afede XIV and the Vice President Daasebre Nana Kwebu Ewusi VII said the House was against the government’s ‘Yes’ position on the December 17 referendum to amend the Constitution to allow elections at local assemblies  to be partisan.

According to the statement, the House of Chiefs is concerned about the adverse effects of partisan politics on local level development if this referendum goes through.

“We want the citizenry to know that the referendum is meant to permit unbridled partisan politics into local government, and so the merits of the proposed reform should be assessed on that basis. We strongly recommend its rejection by the citizens”, the House said in the statement.

However, Chairman of the Governance Committee of the National House of Chiefs, Ogyeahoho Yaw Gyebi II of Sefwi Anhwiaso in the Western Region revealed that the statement did not represent the collective view of the House of Chiefs.

Delivering a keynote address at the UPSA event, Otumfuo Osei Tutu II said: “Because this is a matter of monumental importance, I hope all concerned will step back and take the heat out so we can see the light in the discourse.”